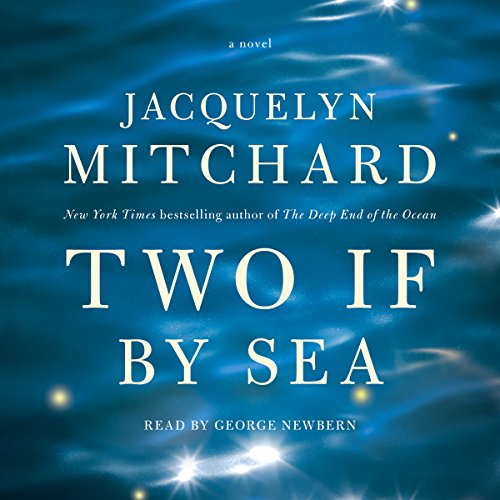 Two If by Sea

By: Jacquelyn Mitchard
Narrated by: George Newbern
Try for $0.00

From the number-one New York Times best-selling author of The Deep End of the Ocean, an epic story of courage and devotion that spans three continents and the entire map of the human heart.

Just hours after his wife and her entire family perish in the Christmas Eve tsunami in Brisbane, American expat and former police officer Frank Mercy goes out to join his volunteer rescue unit and pulls a little boy from a submerged car, saving the child's life with only seconds to spare. In that moment, Frank's own life is transformed. Not quite knowing why, Frank sidesteps the law when, instead of turning Ian over to the Red Cross, he takes the boy home to the Midwestern farm where he grew up. Not long into their journey, Frank begins to believe that Ian has an extraordinary, impossible telepathic gift; but his only wish is to protect the deeply frightened child.

As Frank struggles to start over, training horses as his father and grandfather did before him, he meets Claudia, a champion equestrian and someone with whom he can share his life - and his fears for Ian. Both of them know that it will be impossible to keep Ian's gift a secret forever. Already, ominous coincidences have put Frank's police instincts on high alert, as strangers trespass the quiet life at the family farm.

The fight to keep Ian safe from a sinister group who want him back takes listeners from the ravaged shores of Brisbane to the middle of America to a quaint English village. Even as Frank and Claudia dare to hope for new love, it becomes clear that they can never let Ian go, no matter what the cost.

A suspenseful novel on a grand scale, Two If by Sea is about the best and worst in people and the possibility of heroism and even magic in ordinary life.

What listeners say about Two If by Sea

Wow! An amazing story, interesting characters, beautiful places, love and loss, tenderness and terror, heaven and earth. A must read. (But put cotton in your ears for the occasional f-word or diety-abuse. In fact, even the language is artfully explained away to my satisfaction.)

Master of similes and metaphors to color the prose. The story held me and drew me in but was too fantastic to be real. There was just too many things that happened that were glazed over as acceptable. Odd book but interesting.

I was hooked! Thoroughly gripping. Oh no moments that made me bite my nails. Enjoy.

What a waste! Keep your credit!!!!

The story is long,pointless, and has no real plot. The cover art is okay and the Title was neat, even though, the title had nothing to do with the story. The only part of the story that makes a little sense is there was a flood in Australia a lot of people were killed in the flood including the wife and unborn child of the main character who is from America and works as a volunteer firefighter. He saves a small boy,but the boys brother goes on down stream.
After that the story goes down hill in chapter 2

There are many wonderful books in the world. Yet, sometimes, very occasionally, one discovers a gem like Two If by Sea that is simply perfect. After a tsunami kills his pregnant wife and almost all of her family, ex-police officer and volunteer rescuer Frank Mercy discovers a van containing a woman and two boys that is rapidly sinking in the waters off of Brisbane, Australia. He rescues the younger boy, whom he names Ian. For reasons that he cannot describe, Frank instantly loves Ian deeply and wants to raise him as his own. He soon discovers that Ian has a gift for diffusing tension and bringing out the best in people, even those who are violent. The book tells the story of Frank’s efforts to learn about Ian, raise him, and protect him from those who seek to use his gift for evil purposes.

This brief summary may not sound as though it contains the ingredients of a masterpiece, but Jacqueline Mitchard has made one. The key to the book’s success is that every character is beautifully drawn and fully realized. Thus, they become akin to actual human beings and it is impossible not to love them and root for them. Two If by Sea is a mystery, a romance, a journey of self-growth, and an insightful perspective on the bonds of love that human beings can form with one another, even if they never set out to do so. Settings are as diverse as the aforementioned Brisbane, a horse farm in Wisconsin, and a ramshackle house in rural England. All of these are exquisitely rendered so that one feels as though one is there, without being overloaded with superfluous detail. The book is suspenseful and well-paced. Yet, it feels as though we are simply following fascinating people as their lives unfold logically.

At its core, Two If by Sea is a brilliantly written, absorbing story about lovable characters living their lives in unusual circumstances. As with everyone’s lives, the path is not straight and the lives that Mitchard describes are complicated, scary, stressful, funny, heartwarming, and exciting, all rolled into a series of constantly unfolding, highly interesting events. When I read Two If by Sea, I felt that it was not so much written, as told. It was as though Mitchard invited me to sit with her as she related a fascinating, deeply meaningful story, all in one sitting. George Newburn’s incredible narration brings everything to life and transports one to the world that Mitchard has created so fully and beautifully.

The story and its characters will stick with you in your mind and your heart long after you have finished it. Jacqueline Mitchard has moved far beyond her usual fare of chic lit to create a book that you will not be able to put down and that you will not soon forget. This magnum opus is well worth a credit.

Great beginning but gets more and more boring.

I loved the beginning. Then the story got slower and slower. After 6 hours I couldn't take anymore and returned the book. Could care less about the ending.

Starts out promising, with flashes of brilliance, but gets bogged down in tangents

The story starts out very strong, with a memorable setting, a fully fleshed out main character, and a really interesting main story and relationship. Then it goes off on uninteresting and unrelated digressions for hours about horses and doctors, with a sex scene that feels like it belongs in a different genre of book entirely. The main story pokes its head in on occasion, but never really gets to shine. And you'd think with so many Australian characters, they'd get a narrator who can do a decent Australian accent.