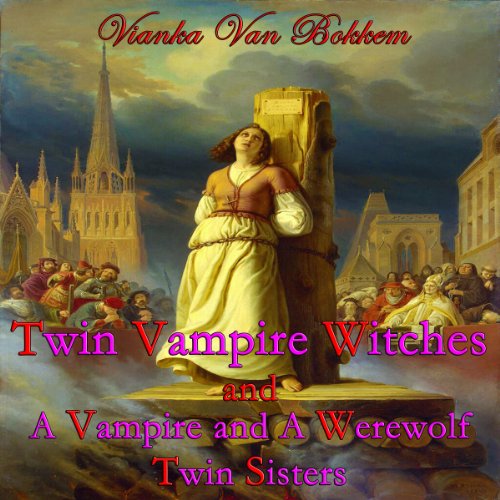 'Twin Vampire Witches' and 'A Vampire and Werewolf Twin Sisters'

By: Vianka Van Bokkem
Narrated by: Ellen Terry
Try for $0.00

In Twin Vampire Witches, Victoria and her twin sister Valeria are half witches and half vampires and when they witness their parents' horrible deaths at the hands of vampire hunters they swear revenge against them and anyone else involved.

What they did not expect was to fall in love with the handsome twin brothers Prince Alexandru and Prince Andrei of Romania.

Excerpted from A Vampire and A Werewolf Twin Sisters:

My father and mother were famous, wealthy, American biochemistry physicists. My name is Audrey and my twin sister's name is Audra. My sister and I were kidnapped when we were two years old. The kidnappers sold me to a vampire couple; Audra was sold to a pair of human spouses. Our new family gave us different names.

I was a teenager and my adoptive parents turned me into a vampire.

When I learned the truth about my origin; I started looking for my twin sister. When I found her I discovered that she was turned into a werewolf, and her adoptive parents didn't know.

Will handsome teenagers Preston and 'Lion Spirit' accept us with our curse? What happened to our parents? Will Audra and I bond while fighting vampire mercenaries?