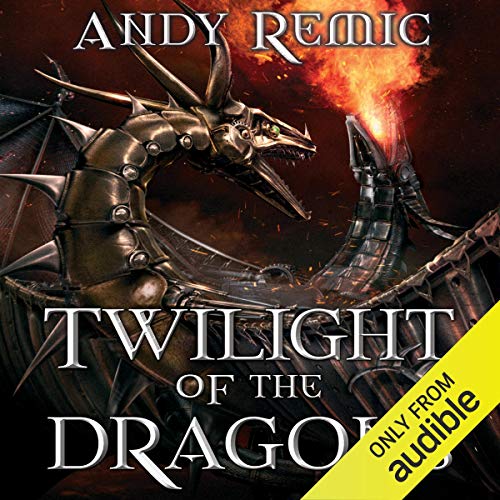 Twilight of the Dragons

By: Andy Remic
Narrated by: Barnaby Edwards
Try for $0.00

During a recent dwarf civil war deep under the Karamakkos Mountains, the magick-enslaved dragonlords broke free from centuries of imprisonment and slaughtered tens of thousands throughout the Five Havens before exploding from the mountain and heading in fire and vengeance for the lands of Vagandrak.

Two once-noble war heroes of Vagandrak - Dakeroth and his wife, Jonti Tal, an archer and scholar; the Axeman; the White Witch; and a Kaalesh combat expert find themselves in a unique position: for they have discovered the ancient dragon city of Wyrmblood...and 1,000 unhatched dragon eggs.

Dakeroth and his companions must work with their enemies, Skalg and the Church of Hate, in order to bring down the dragonlords and save the world of men and dwarves. But there is no bartering with these ancient dragons, for they seek to hatch their eggs and rebuild the cruel Wyrmblood Empire of legend.

What listeners say about Twilight of the Dragons

Again just a lot of unnecessary swearing and it doesn’t make the story better.
Book two isn’t as good as book one in fact I couldn’t even finish it.