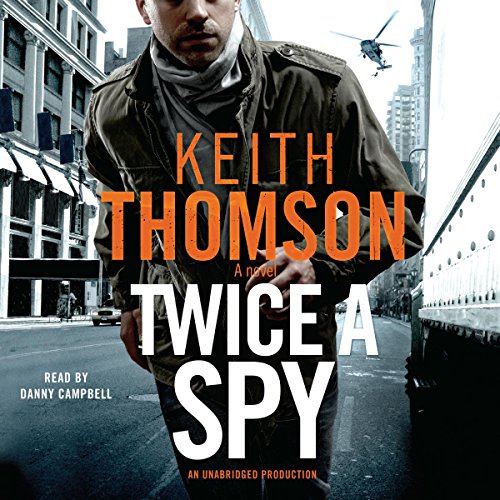 By: Keith Thomson
Narrated by: Danny Campbell
Try for $0.00

On the heels of Once a Spy, which PW hailed as a “wildly original debut [with] an action-packed story line,” Keith Thomson returns with a breakneck thriller that’s twice as explosive as the original.

In the tradition of Robert Ludlum, with a witty twist, Thomson’s second novel featuring a former spy and his son once again poses the question: What happens when a former CIA agent can no longer trust his own mind?

Charlie and Drummond Clark are now in Switzerland, hiding out from criminal charges in America and using the time to experiment with treatments to retrieve Drummond’s memory. When NSA operative Alice Rutherford, with whom Charlie has fallen in love, is kidnapped, the Clarks must dodge a formidable CIA case officer and his team to get her back.

What listeners say about Twice a Spy

Not sure I can recomend this book to anyone. I read the first book from this author in the two book series and enjoyed it. Thought I'd try the audio version for the sequel, big mistake. I'm going to get the paperback when it is available only to see if I can get through it that way.

Stay away from this audio version unless you need something to put you to sleep. I really tried three times to get through the book and fell asleep on a plane twice, on my back deck and didn't fall asleep in my car, but tuned it out. I drive one hour each way and listen to a lot of books, this is only the second one I have ever gotten that I truly could not listen to. Sorry, voice is way too monotone and lacks range to offer any character differentiation. Whew!

The first book in the series was pretty good - good enough that I was willing to buy the second one. Clearly the book is set up for a third one - and I won't be purchasing that one. I am willing to suspend disbelief with novels but this was just ridiculous. I was hopeful it would get better as it went on, but it didn't. I love the premise of the father with Alzheimers, but there is just WAYYY too much that is outside any realm of possibility and it makes it ridiculous. Keep writing, Mr. Thomson, but go ahead and lose these two characters.

If you read or listened to "Once a spy", you need to go ahead a read/listen to this one. It's pretty good.