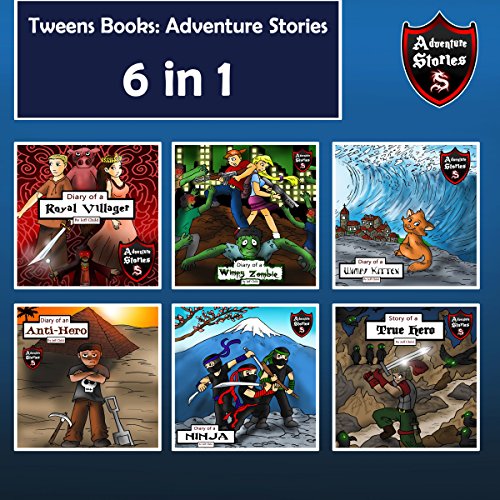 By: Jeff Child
Narrated by: John H Fehskens
Try for $0.00

Diary 1: Ruben grows up on a farm, with pigs, horses, and chickens. He works at a construction company, but the appearance of certain animals makes him question his background. Is Ruben really destined to be more than what he is? A pig, a firefly, and an eagle reveal his true identity, his true home, and his true bloodline. His destiny awaits him. Find out in this child-friendly, adventurous story.

Diary 2: They remember how it all started...how the experiment went wrong. Perhaps the answer lies at the school they came from. Sander and Sally find themselves fighting back hordes of zombies and wonder if it is ever going to stop. They should one zombie after another. But then they meet a zombie who is different from the rest. Will this particular zombie lead them to the solution of the apocalypse? Listen to the book and find out!

Diary 3: Meow is a scared kitten. His older sisters and mother always protected him. He gets teased by other kittens, and he especially a wimp when it comes to water. He hates it! He won't go near it...until a certain event in the harbor village changes his life forever and turns him into a true hero. A ship, a vision, and a breaking dam cause a wimpy kitten to turn into the savior of the village. Listen to the book to find out how he does it!

Diary 4: The main character is a mysterious figure showing up, spooking people out, planting trees randomly and building pyramids in inconsistent locations. Discover through this book what he has to say about his reasons for doing so and find out more about this mysterious being. He loves puzzles, ancient Egyptian buildings, and strange things, he hates the fact that his brother died, and he is a genius beyond any reasoning.

Diary 5: These ninjas are on a mission. They detest the inequality in the lands and decide to do something about it. Providing for the poor and stealing from the rich is their purpose, but they are yet to face a true evil among them, another ninja who stands in their way and seeks nothing else but to destroy these benevolent guys. Follow the diary of the three fighting ninjas who stay in the shadows and become more than just vigilantes. Or are there four ninjas? This story is full of surprises.

Diary 6: The life of Rufus the knight is slow but satisfying, until he finds out he could do better. Looking for answers to help him improve his talents, he seeks out the commander of the protecting knight army, who simply asks him if he is ready to face some of the most severe tests in the country. Focused on his goal to become a true hero, Rufus ventures for excellence as he come across mean creatures and vile monsters before he can call himself a "Knight of Honor." He has to deal with dangerous crows, slithering snakes, and challenging puzzles. Will he be able to prove himself?

What listeners say about Tweens Books: Adventure Stories for Tweens, Teens, and Kids

I really enjoy listening these to my baby at bedtime. I bought the rest of the unicorn books as well. This is really exciting and loaded with great stories for children. I will share this book to my friends who have kiddos too. I bought this book for my niece to make her more adventures and enjoy the freedom to choose, she like this book.

Very awesome book I give it 5 stars and all that stuff. Will sure that every kid should love listening this book!! Its very exciting and entertaining too much useful information is squeezed in such a short book.

Great stories if you like action. They were more for boys than for girls, but definitely worth it.

This book is awesome!

A very entertaining book for kids.This book will give their imagination active and adventurous. My nephew love this story.

Very awesome book I give it 5 stars and all that.

Very awesome book I give it 5 stars and all that stuff. Will sure that every kid should love listening this book!! Its very exciting and entertaining too.much useful information is squeezed in such a short book.Author has described every single thing very clearly with some proper explanations.Such an excellent book.Highly recommended.

I really love this bundle i'm so glad that i bought this book!!!

Wow. I wish I had known about this combo earlier. Fun stories with twist endings. Perfect for kids. All happy endings.

My 10 year old enjoyed this series

my 10 year old recommends this, his favourites were the diary of a kitten and the anti-hero.