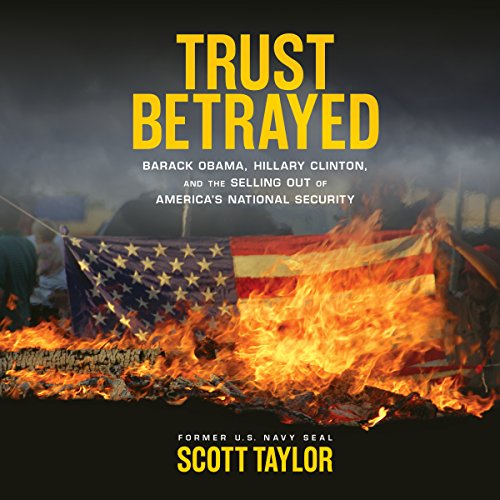 Barack Obama, Hillary Clinton, and the Selling Out of America's National Security
By: Scott Taylor
Narrated by: Sean Householder
Length: 7 hrs and 40 mins
Categories: History, Military
4.5 out of 5 stars 4.6 (18 ratings)

By: Scott Taylor
Narrated by: Sean Householder
Free with a 30-day trial

Ex-Navy SEAL sniper Scott Taylor served his country for eight years. After he was injured in a fall during Operation Iraqi Freedom, Taylor came home - and discovered that the Obama administration was leaking sensitive intelligence information for political gain. Now, on behalf of all the men and women in uniform abroad whose lives have been endangered, Taylor is speaking out. Having served as a sniper in the same region of Iraq as American Sniper author Chris Kyle, Taylor knows firsthand how high the stakes are. From the bungling of Benghazi to the rise of ISIS, the White House has betrayed the trust of American forces. It's time President Obama and his administration were finally held accountable.

What listeners say about Trust Betrayed

Accurate a must read!!!

This is the most accurate description of our foreign policy of the last 7 years that I've ever read. It is well written in an objective professional manner.

Narrator was exhaustive. Did not enjoy listening to the dynamic of these events as they unfolded. As it all ran together perhaps it was written that way. Expected more detail and less run. God Bless all of the men and women who serve our country. It is a selfless job and often traumatic.