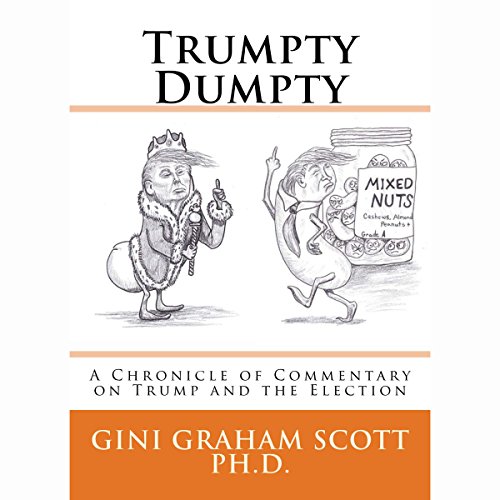 Trumpty Dumpty features a series of columns I wrote on Huffington Post about the dangers of a Trump Presidency not only to the US but to the world. It begins with an article on why Trump was not attacking the cartoonists and writers who were writing critical articles about him, although he has attacked members of the media as the lowest form of humanity and journalists as horrible, disgusting, and dishonest human beings. Then, the articles ask if Trump is nuts or mentally deranged, comparing him to animals fighting for power and territory and to nuts (literally). A final article in the series reflects my reaction to the naked Trump statues that appeared in five US cities - New York, Los Angeles, San Francisco, Seattle, and Cleveland. Trump was presented as the "Emperor with No Clothes", which is the same fairy tale that led me to begin commenting on Trump back in February 2016. Thus, since I started with a commentary on a naked Trump with no clothes, it seems only fitting to end this series with my comments in response to the naked Trump statues. More specifically, the chapters feature these articles:

Why Isn't Trump Attacking the Cartoonists and Writers Who Are Attacking Him? Why Trump Is Like a Fighting Animal Is Trump Really Nuts? Does Trump Have Early Stage Alzheimer's? Pro-Trumpers Respond to the Question: "Does Trump Have Early Stage Alzheimer's?" Trump Is a Nut Website Echoes Vie of Republican Insider The Naked Trump Statues Show Trump's True Nature

What listeners say about Trumpty Dumpty