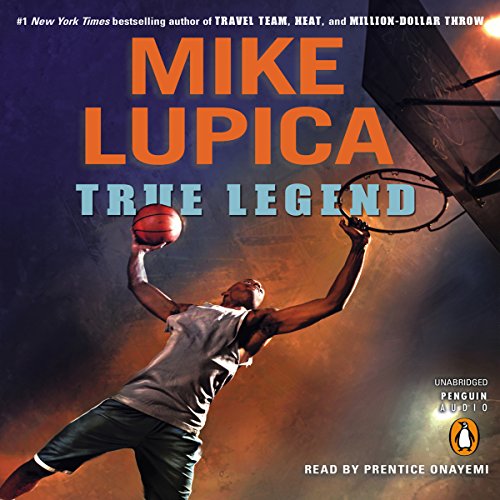 By: Mike Lupica
Narrated by: Prentice Onayemi
Try for $0.00

There's a reason teammates call him "True". Because for basketball phenom Drew Robinson, there is nothing more true than his talent on the court. It's the kind that comes along once in a generation and is loaded with perks - and with problems.

Before long, True buys in to his own hype, much to the chagrin of his mother, who wants to keep her boy's head grounded - and suddenly trouble has a way of finding him. That is, until a washed-up former playground legend steps back onto the court and takes True under his wing.

In this age of street agents promising riches to kids barely out of elementary school and college programs being taken down because of recruiting violations, True Legend is a resonant and inspiring novel in the Lupica tradition.

"The perfect trifecta of deep knowledge and portrayal of the history and culture of basketball, keen insight into the obstacle course of motivations and temptations facing a talented young man, and perfect-pitch sports writing.... Lupica is the greatest sportswriter for middle-grade readers, and this book, True Legend, is a reminder of his dominance." (VOYA, starred review)

"Written in a fluid mix of slightly distant exposition and terse dialogue, the tale features plenty of suspenseful, expertly depicted hoops action along with choices both wrong and, ultimately, right made in the face of glittering temptations." (Booklist)

What listeners say about True Legend

Great for any basketball lovers.

This book met my expectations and surpassed them, and the narrator was great. Amazing book for anybody that loves sports

It is a great book for basketball fans. The narrator and the story was great. I really enjoyed it.
Happy!

My son isn’t much of a reader but he will sit and follow along and listen to these stories. He is even starting to the read the the story on his own because he wants to know what’s next

Another great book by Mike Lupica

great story about how a jock turned into a student athlete right before his eyes. highly recommend for those who dont value school.

loved it cause it wasn't frustratingly exciting. it wasn't sexual. which was my favorite part. it doesn't have curse words. just a good old fashioned story! loved every minute!

I loved this book. It had a great storyline with lots of heart filled emotion. While being simple and was not too hard to follow along with, had so much great content and wanted you to just keep listening. Definitely recommend this book to anyone