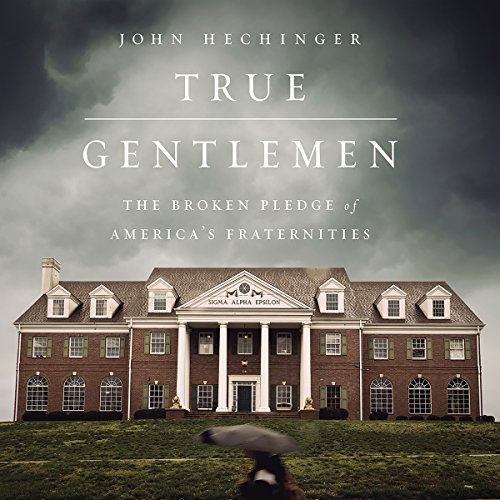 By: John Hechinger
Narrated by: Rick Zieff
Try for $0.00

An exclusive look inside the power and politics of college fraternities in America as they struggle to survive despite growing waves of criticism and outrage.

College fraternity culture has never been more embattled. Once a mainstay of campus life, fraternities are now subject to withering criticism for reinforcing white male privilege and undermining the lasting social and economic value of a college education. No fraternity embodies this problem more than Sigma Alpha Epsilon, a national organization with more than 15,000 undergraduate brothers spread over 230 chapters nationwide.

While SAE enrollment is still strong, it has been pilloried for what John Hechinger calls "the unholy trinity of fraternity life": racism, deadly drinking, and misogyny. Hazing rituals have killed 10 undergraduates in its chapters since 2005, and, in 2015, a video of a racist chant breaking out among its Oklahoma University members went viral. That same year, SAE was singled out by a documentary on campus rape, The Hunting Ground. Yet despite these problems and others, SAE remains a large institution with strong ties to Wall Street and significant political reach.

In True Gentlemen, Hechinger embarks on a deep investigation of SAE and fraternity culture generally, exposing the vast gulf between its founding ideals and the realities of its impact on colleges and the world at large. He shows how national fraternities are reacting to a slowly dawning new reality, and asks what the rest of us should do about it. Should we ban them outright, or will they only be driven underground? Can an institution this broken be saved?

With rare access and skillful storytelling, Hechinger draws a fascinating and necessary portrait of an institution in deep need of reform, and makes a case for how it can happen.

"What happens behind the bolted oaken doors of American fraternities? John Hechinger's relentless reporting and fine critical intelligence reveal all too much about the worst of frat life in America. A necessary and significant book." (Mark Edmundson, professor, University of Virginia)

"John Hechinger draws a complex, layered, but comprehensible portrait of the infamously elusive and exclusive college-bred base of Donald Trump. It is hard to imagine a better moment for this investigation of one of the foundations of White male privilege-the college fraternity. True Gentleman is indispensable if Americans are going to figure out why women's lives, why poor lives, why queer lives, why non-White lives are still so disposable in the United States of America." (Ibram X. Kendi, National Book Award-winning author of Stamped from the Beginning: The Definitive History of Racist Ideas in America)

What listeners say about True Gentlemen

Every parent should read

I purchased this book for background research. I am working on a case involving College drinking and hazing. It is very well researched and written. the book explorers the fraternity culture of hazing, alcohol consumption and abuse, sexual assault and abuse, and institutional racism. the book focuses on the fraternity Sigma Alpha Epsilon. This is primarily due to the secrecy involved in fraternity life. Sigma Alpha Epsilon, as part of a settlement stemming from a hazing-related student death, was required to publish statistics and information regarding their disciplinary record online. Examples of other fraternity offenses are found throughout the book.

If you are a parent, about to send your son off to college, this would be an eye-opening education about fraternity life. I went to college but was not a member of a fraternity. Much of what I believed about fraternities was a caricature. I thought they were pointless drinking social clubs. This book paints with dramatic color, just what goes on in fraternities, and what it will take to change them.