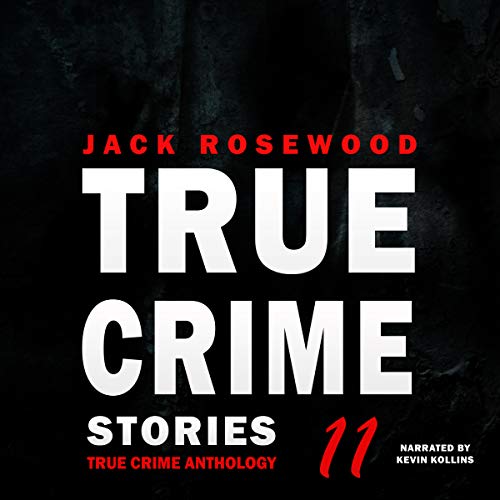 By: Jack Rosewood
Narrated by: Kevin Kollins
Try for $0.00

In this true crime anthology, you’ll learn about some of the most shocking true crime cases that have happened in the last 40 years. You will find yourself thrust into a world that is often depraved but always intriguing and fascinating, leaving you wanting to learn more.

These 12 cases, which span the globe, are a true testament to the idea that crime comes in all shapes and sizes. There are a number of themes in this volume, including missing persons, road trips gone wrong, and family annihilations. You will hear about a case in New Zealand where two young people celebrating the New Year vanished without a trace never to be seen again, yet a man was still put on trial for their murders. The tragic case of Denise Pikka Thiem - a woman who went on a world trip to find spiritual meaning but ended up murdered - is also profiled in this book. The unfortunate phenomenon of mass murder, particularly family annihilation, is covered in two uniquely bizarre cases in this book. In one case, a man claimed a voodoo demon drove him to murder his family, while in another a man dressed as Santa Claus attempted to murder an entire family during the holiday season.

Along with those cases are several others that highlight the strange and dangerous world of the modern criminal. After hearing all of the murder mysteries in this volume you will be left wanting to read more. So sit back, relax, and start this engaging true crime book to learn the secrets of some of the worst criminals to walk the Earth over the last 40 years!

Been listening to different true crimes for a while now. Jack Rosewood is one of my favorite story tellers of true crime. He does the research and really tells you the story as if he was there. Really makes these stories that much better. I can easily listen to his stories while my wife watches the ID channel. Night and day.

For Someone into true crime this told enough of each story to get you interested and act as a nice introduction to each case for you to get intrigued and then go do further research. As I said, my wife makes me watch a lot of the ID channel and these stories are so much better. These are a step above both in the story and how they are told. These are not all buttoned up like other true crime stories, but they will make you second guess the whole way through.

I hadn’t heard about some of these killers and was constantly pausing to look them up. As a person who believes that safety is one owns responsibility, I can’t help but remember that as I listen to how crazy random people can be.
Kevin Kollins is a great narrator for this type of book. He has narrated other Jack Rosewood books and I’m glad he continues to do them. His voice is perfect for this just like Rod Serling on Twilight Zone.

Rosewood Does It Again

I have had the pleasure of listening to several books withe Jack Rosewood is the author and let me tell you, it never gets old. I love the research and stories that Rosewood puts together, where is it so easy to get engrossed in the story.

Thing about short stories are they never overstay their welcome, i’m so used to reading super long fantasy novels that sometimes i just need a break and recharge so i can go back to those books i enjoy so much. This short story gave me that and honestly i wish it was longer!

I am always surprised at the amount of crime and hatred that is out there in the world. Each new volume from this author brings to light how depraved some individuals can be. This is volume 11 and there is still new crimes to write about. Jack Rosewood does a good job of compiling and giving details of these crimes. Each chapter gives you a new evil to learn about. It is never repetitious or boring as we are given the details of the crimes and the consequences and punishments for them. Kevin Kollins keeps the narration going at a good pace and keeps the listeners engaged in the stories. If you are a fan of true crime stories this book is one you should check out.

I received this audiobook at my request and I voluntarily wrote a review.

Jack Rosewood brings us another excellent collection of true crimes. If you enjoy hearing about true crime then you need to pick this collection up. Mr. Rosewood does his homework and gives the listener or reader the true horrors these people have committed in an interesting way. The narration is well done. Kevin Kollins read at a nice pace and has a very nice voice to listen to.

True Crime Stories Volume 11: 12 Shocking True Crime Murder Cases was another good read by Jack Rosewood. This is another great collection of true crime stories that any true crime lover will enjoy. It consisted of twelve cases across the world that will shock you.

True Crime at its best.

I am a huge fan of Jack Rosewood and his true crime books. He introduces you to the victim, the killer, and the crime. You get a history on the killer before during and after the crime. In some cases you also get to know the neighborhood or town where the crime happened. Jack brings all of the answers to questions before I have to ask them. Kevin Collins does a really good job narrating this book. He is not dry or boring. He keeps all of the stories in the book moving.

I just finished this amazing book. It was a fantastic read.
Jack Rosewood does a great job of telling these true crime stories. He keeps the reader engrossed throughout the book. Its a relatively short book, so I was able to read it in a matter of hours.
The book recounts 12 true crime cases. There are cases of family anialation, murders of children, a murder of a retired couple, and murders which took place abroad.
The book is a real page turner. You keep on turning the page as you want to know what happens next.
This book is a must read for any true crime fans out there.
You can get it on audible, I got my copy in exchange for an honest review.
I highly recommend this book. It gets a 5 star vote from me!
Looking forward to reading more of Jacks books soon!

This is an excellent volume in a long series of true crime stories. In this volume, a trial for a pair of missing people is particularly interesting. I was very impressed by how intriguing these stories were, and horrified that they were true.

The narrator speaks well and clearly, and the content is a thrilling collection of stories. Highly recommended.

Narrators voice completely grating
You have to set through what feels like an hour of banal platitudes before you get to the stories. Avoid at all costs.

This is the first time I've listened to one of Rosewood's True Crime Stories and not known any of the people discussed in the book. This book was really interesting, covering a range of countries (I particularly liked the one discussed where the person went around pretty much the entire UK in an attempt to evade capture) and a range of crimes (family annihilators and missing persons and more). I listened to this book in one sitting, and I wasn't disappointed.