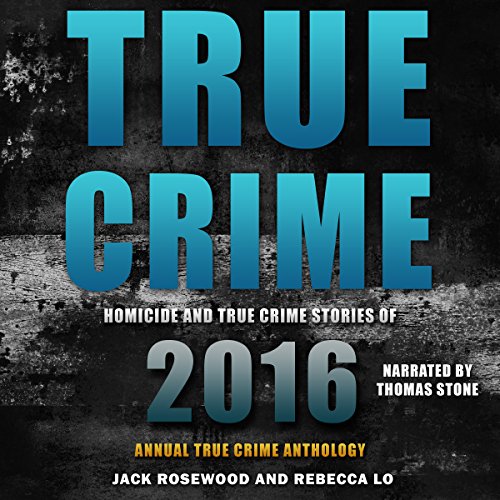 By: Jack Rosewood,Rebecca Lo
Narrated by: Thomas Stone
Try for $0.00

Almost every year, we believe that nothing can top the abject horror of the last 12 months when it comes to true crime stories, homicides, execution-style murders, or serial killers that are still on the prowl, leaving behind a trail of blood, tears, and sorrow.

Then, of course, the New Year begins.

And so, too, begin the murders, bodies dumping beneath the snow, behind dumpsters in the worst parts of town, or left just where they fell, killed by a madman with a gun.

Unfortunately, terrible, barbaric things have happened since the beginning of time, when medieval torture devices included the iron chair (a victim was forced to sit in a chair made of iron spikes, while restraints were tightened so the spikes would slowly, painfully penetrate the body) and the pear of anguish (device with four sections that stretched outward after the instrument was inserted into any orifice of a victim's body - vagina, anus, or mouth - and stretch, causing permanent damage, while the Catholic Inquisition gave us the rack, which essentially tore its victims limb from limb to elicit a confession. When one inevitably came, the broken confessor was set on fire for his or her crime. So why should we be surprised to learn a serial killer is stalking Alaska, shooting people in the dark at the city's peaceful parks, while another makes his home in Phoenix, randomly shooting his victims, leaving residents looking over their shoulders with nervous anxiety wherever they might go?

People have been capable of terrible things since the beginning of time, and they seem in no hurry to put an end to their sadistic actions.

What listeners say about True Crime

Not a lot of details, list of crimes for 2016 very few "interesting" points. Not much insight to why....lots left incomplete mostly due to upcoming trial or "suicide"
not my favorite. Narrator was okay....

Exactly What it Should be

True crime is my favorite genre to listen to and sometimes I'm in the mood for a series of short stories instead of one, extremely detailed, long one. For this purpose, this book is perfect! I would recommend this book to anyone who enjoys true crime (and anyone who doesn't want to make a big commitment to a very long story!)

No probably not. Not enough detail to stories.

What aspect of Thomas Stone’s performance would you have changed?

Not as monotone sounding

I was voluntarily provided this free review copy audio book by the author, narrator, or publisher.

Wonderful anthology. Well written and interesting. Definitely worth it for any true crime fan.

This is a very good book with a lot of cases that I hadn't heard of before. Well written and the narrator did a great job. Looking forward to more books by Jack Rosewood!

Crimes For Each Month (except December)

The audiobook narration was very good - the tone and pacing weren't distracting and complemented the content of the book.

This audiobook featured a selection of true crime stories for each month of the year, which is why it's given a title of 'Annual True Crime Anthology' in the Amazon title. However, December isn't included in the book. The author notes at the beginning of the book that this is because of publication time constraints - understandable timeliness, if the objective is to publish an annual anthology as early as possible in the next year. However, I think it's a bit weird to deliberately organize the stories into monthly sections and omit the final month of the year entirely. By dividing the book into monthly sections, the omission of December becomes more glaringly obvious. So my suggestion would be to include all of these stories chronologically by month, but don't divide them into specific sections named for each month. Either that, or in future annual anthologies, delay the publication for another few weeks so that at least one story for December can be included in the volume.

As with any anthology or short story collection, some stories are bound to resonate more with individual readers than others. I felt that some stories fell a bit flat, while others were riveting from start to finish. All sorts of crimes and all sorts of motives were represented in this volume, which was refreshing; if all stories are the same theme, then they start to get confusing for readers like me because it gets harder for me to differentiate and remember specific stories.

Conversely, the stories that I enjoyed the least were missing the elements I mentioned above. Especially stories where the case is cold or where a suspect has been arrested but hasn't gone to trial so we don't know about things like motive or outcomes. It's like watching live sports on television and the last five minutes of the tied game gets cut off because it's the top of the hour and the next show is scheduled to start. There are, unfortunately, hundreds and hundreds of criminal events to choose from, and so my preference is to read about events that have an ending. Having said that, perhaps a cool way to address this would be to provide a digest-length update of the unfinished cases from the previous year's anthology in the subsequent year's volume. So that would encourage us to get our hands on next year's anthology to find out what happened in the stories that weren't concluded during the previous year. (Of course, I could simply do an internet search of the cases a few months from now and get an update, but if I were an author or publisher, I'd see it as an interesting way to build a base of loyal readers over the long run.).

Since I'm reviewing the audiobook, I can't speak to the presence of typo or editing errors in the print version of the book. I can easily see how that would distract readers of the print edition. Things like grammar or typo errors jerk the reader out of their emotional domains and into their cognitive domains, and detract from the experience of enjoying the book. So, none of that type of distraction for me as an audiobook listener. However, the distraction that I DID experience numerous times was how the narrator read sub-section titles within each story. I don't know how it visualizes on a printed page for this book, but every few minutes the narrator would stop the flow of the narrative and read the title of the next sub-section of the story. I personally think that these sub-section titles could have been left out of the narrative. The writing is well done, so I can easily follow the change in topics within the story - an extended pause by the narrator is enough to signal that we're switching to a different theme within the story. Anyway, it's quibbling, but it's something that disrupted the flow of the story to me as a listener.

My final little quibble, from an audiobook listener perspective, is that the chapter breaks in the audio file occurred between each month rather than between each story. So when I wanted to slide back to re-start a story if I got distracted, I had to manually hunt and peck to find the start of the story. (If I hit the rewind button, it brought me back to the beginning of the month, not the beginning of the story - because in this anthology, most months contained multiple stories.).

Would I recommend this book? Absolutely! The narration was quite good and there were enough compelling and satisfying (a bad choice of words, but you know what I mean) stories that I have no regrets investing my time listening to it.

I provided an honest review in exchange for a complimentary copy of the audiobook.

Another great, informative, and well written collection of true crime stories. There were many cases included in this volume that I had never heard of and each was full of interesting information about the criminals, and victims when available. If you're a lover of true crime, be sure to get this one.

I really enjoyed this book Jack rosewood is a great author, he had stories on hear that I had not heard before I listen to the book twice.
I received this book from the author and or narrator for a honest review and unbiased opinion via audio book com the narrator did a excellent job


A recapping of true crimes from last year.I remember reading about a lot of these when they happened. One of them only a couple counties southeast of where I live. When I was telling my non-reading, hard of hearing husband about this book, he said he wanted to read it. I borrowed e-book version from Kindle Unlimited for him.


The narration was well done.Thomas Stone made the telling of these stories memorable.

bought this read one story and was turned off by the subject matter, too gruesome.