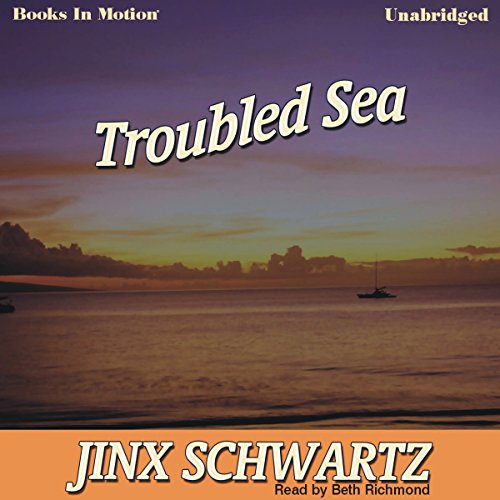 By: Jinx Schwartz
Narrated by: Beth Richmond
Try for $0.00

Hetta and her husband, Bob "Jenks" Jenkins, have finally broken free from the rat race of corporate America. Having forsaken the shackles of deadlines, they have been enjoying the soul liberating life of freedom. For the past five years, they have traveled on their boat, Jensky, meeting new friends and finding their true selves. Freedom, however, comes with a price. As the Jenkins find, the sea is an unforgiving mistress.

Hetta and Jenks meet up with an old friend, Bud, a fellow water rat, to discover he has a new flame - a much younger lady (too young, too lithe and too evil, Hetta muses).  The Jenkins happen upon a GPS unit and several packs of cocaine  when they land in Mexico. Soon, they find  that Bud's loyalty  seems as shallow as his mistress' personality.

Finding themselves followed constantly by two men, they go to the local police for help. However, they seem to care less about this and begin to suspect Hetta and Bob are drug mules. The U.S. Coast Guard finds a boat similar to the Jenksy adrift in the Sea of Cortez; its occupants butchered by machetes. They find in a satellite photo that a small Panga has been blown up, and trace the Jenksy to being in the area.

Soon, the Jenkins find themselves caught up in a world of drug runners and arms dealers. On the run from drug cartels and the Mexican police, they are running out of time.

What listeners say about Troubled Sea

The narrator sounds as if she is reading to a group of pre-schoolers. The overacting and terrible accents are grating. I feel as if I wasted my money, paying to be annoyed for nearly ten hours. The writing is also quite corny. I wonder if I bought this audiobook without listening to the sample or if the sample just didn't convey how poorly narrated it is? Basically, this just a very bad audiobook. Don't waste your money like I did.

Don't bother with this second one!

Would you ever listen to anything by Jinx Schwartz again?

Who would you have cast as narrator instead of Beth Richmond?

I think Beth Richmond COULD be better if she didn't sound like she was reading to children.

Disappointment. Listened to the first one, and thought perhaps the second one would be better because the first one ended better than it began, but I was wrong. Did not follow the first book well, nor did it build into anything good.