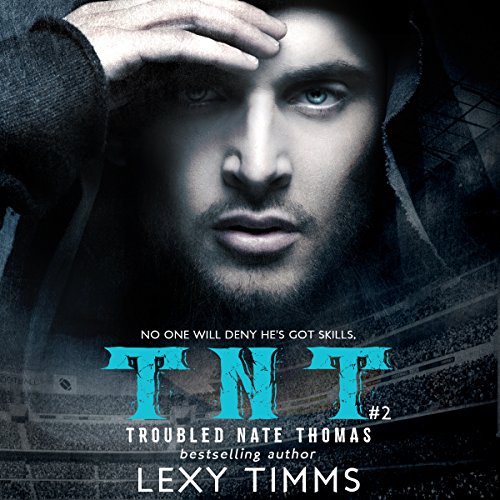 Growing up is hard to do. The infamous Troubled Nate Thomas, aka T.N.T., has seen himself the way the world sees him and it isn't pretty. While he's set on reinventing himself, his own teammates are sabotaging him at every turn. After all, where would the Broncos be without their dynamite? It seems the only person who was willing to give him room to be a better person is Amanda, but she's caught up in her own drama as she reassesses her own career goals.

United they stand, divided they fall. By reaching for each other can they weather storms of rumor, betrayal, and the return of a first love?

The game's not even half over, the score's tied, and there's a halftime show in the works that promises to blow the lid off everything. But you have to expect explosions when you're playing with TNT.

This one had lots of emotion in it. I can’t wait for the next one. The narrators were outstanding and did the emotional parts just right!

Not my fav book/story, but I wanna know hiw it ends , so I guess I'll have to check out part three

This is a not finished!

This is book 2 in the series. I found it to be so good, but wished it was the complete story. The book doesn't end in a true cliffhanger, but just stops (3rd one picks up exactly where this one ends). I enjoy the relationship between Nate and Amanda. I found the narration to be so great! I think its a great example of duet narration. La Petite Mort and Ruby Rivers bring so much emotion to their character's performances. The story pulled me in and makes one want to see Nate and Amanda grow up and together. I loved the setting of Denver and Colorado Springs for this story. Having been to a Denver Broncos game, I especially loved the details. My review is not a synopsis of the book, but rather my opinion of it. I was given this free review copy audiobook at my request and have voluntarily left this review.

Make sure you have TNT 3 lined up to read next. This one ends in a dangling cliffhanger! Amanda and Nate are at odds. Nate is falling down a very slippery slope. He is truly living up to his name and his new coach seems to have it out for him. This book has many downs with a few happy moments. It does explain a lot of the back story to each character's past and their relationship with Nate.

Nate is Full of Trouble

Nate and Amanda goes through so much drama to figure out what they want out of their relationship. They have to deal with the media and what Amanda wants in her career. This is a good story that does not end.

A little angst, a little romance, a little sex, some banter between teammates and we have the makings for a fun series. This is book 2, and while you can pick it up and understand the story, it's best if you start with the first of the series. Nate is back playing, but his life is not fulfilled, struggling with the new coach and unhappy without Amanda. Amanda is trying to move on, but is having problems getting her life on track. These two are so hot when together and so distraught when apart, it's hard not to want to put them in a room and make them work out their problems! There is a lot of camaraderie with the team, getting to see members from the first book of the series as well as Amanda's family...her mom is certainly a piece of work! Cliffhanger at the end, so make sure you have book 3 lined up to start!

La Petit Mort and Ruby Rivers narrate this installment, and the two are so incredible together, you cannot wait for the next book . Their chemistry when performing is evident carrying through to the storyline making the characters feel real. Love this team.

Well I'm giving it a 5 star because it was a good story I actually wouldn't mind reading the ebook version. The narrators provided great performances. My dislike in this particular audiobook wasn't story or performances but that I felt like there were parts read buy the male narrator that should have actually been read by the female, like scenes without him in it but yet the male read through except for the female characters actual speaking lines, etc.

More of the story

This part get a lot more interesting. Both of their lives are out of control. Nate is having doubts about his worth, his career and his lifestyle. Amanda love Nate but can’t handle everything plus his immature behaviors. She doesn’t see where she can fit into his lifestyle. A lot is brought together by the end of this part but a lot is still up in the air. La Petite Mort (Narrator), Ruby Rivers (Narrator) have done a great job making me feel this is real. I can’t wait to hear the last part. I’m hoping for a lot of answers. I was given a free copy and this is a voluntary review.

This was the second book in the series. This was funny and delightful. I enjoyed the characters. Thanks

why is the narrator calling him nate turner? isnt it nate thomas??? i was confused.

I found this second book is just as good as the first. The relationship between Nate and Amanda is growing. We are left with a cliffhanger , looking forward to the next book.