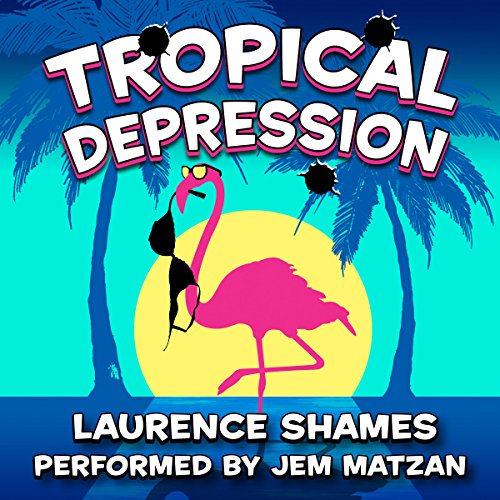 By: Laurence Shames
Narrated by: Jem Matzan
Try for $0.00

When Murray Zemelman, a.k.a. The Bra King, pops another Prozac and heads to the Keys, he has nothing much in mind beyond a quixotic hope of winning back his first wife, Franny, whom he dumped years before. But when he forms an unlikely friendship with Tommy Tarpon, the last remaining member of an obscure Indian tribe, another plan also starts shaping up in his fevered brain. Why not open up Key West's first casino?

Why not? Well, how about because the Mafia, in league with some of the nastiest politicians you will ever meet, is determined to kill anyone who tries? Somehow, Murray, Tommy, and Franny didn't think of that until they were in way too deep. Laugh along as they improvise a manic and ever more desperate campaign to keep their casino dreams - and themselves - alive.

What listeners say about Tropical Depression

the new narrator took some getting used to I was used to certain peoples voices be a certain way but after about the middle I got used to everything and worked out fine. onto book 5

Would you consider the audio edition of Tropical Depression to be better than the print version?

Have not read the book.

Jem delivered a very enjoyable performance. This is the first audio book to ever pass my ears. Kept me hanging on.

Who was the most memorable character of Tropical Depression and why?

The Bra King and Tommie of course were quite a pair, loved their interactions.

Really enjoyed this book, listened to it in two segments. This book had it all, suspense, humor, drama, great characters, wow, may listen to it again.

Terrible Narrator. His "voice" for Tommy makes him sound like some mentally challenged dolt.
The overall rhythm and overly precise articulation of the narration is VERY distracting.