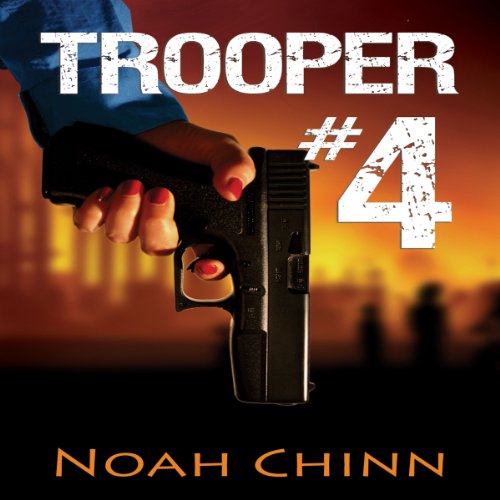 By: Noah Chinn
Narrated by: Barbara Benjamin-Creel
Try for $0.00

It's the end of the world, but not as we know it. A woman wakes up in a motel on the outskirts of a remote Oregon city with no memory of who she is, a gun at her bedside, and a state trooper uniform. As she explores the world outside the motel it seems that civilization has come to an abrupt end, and whatever caused it is still out there, looking for the survivors.

That's bad. But it might also be the most normal thing that happens to her all week.

What listeners say about Trooper #4

What did you love best about Trooper #4?

I enjoyed the narration, especially the different voices of this particular narrator. It was a different type of post apocalyptic story, which was refreshing.

I really like this audiobook. It's a different take on the apocalypse and zombies or moaners, which was neat but the narration took it over the top to great! I like the way the story started with Felice having amnesia. It seemed everyone had it. It goes through her thought process of who, what, and where she is. She's a police officer so she gets into her patrol car and gets to a place named Fort Rock where she finds a kid beside the road who also has amnesia and determines that Mikey is a good name for him. She takes him with her and they begin their trek..

She's packing a gun and a Gideon. Over the radio she picks up a signal from somewhere, from someone known only by the name Uri so her aim is to get there safely with Mikey in tow. Wherever 'there' is. Her and Mikey take off for Haven and it becomes a perilous, but in a way, an exciting journey. Finally, she meets up with Agent Groves along with some other fun characters who are able to explain a few things to her about what's happening. I love the quips throughout the story. It adds a little lightheartedness to the seriousness of their situation along with some great twists.

Overall, I love the spin on the apocalypse and the story is hard to stop listening to. There is something very unique it. About halfway through I had to force myself to turn it off last night. Overall, I would definitely recommend this one. It has a lot of appeal. This segues me to the narration.

Barbara Benjamin-Creel does a fantastic job narrating this audiobook. I enjoyed a different setting for her this time as it shows her versatility as a skilled voice actor. I seriously loved her in this role. Couple that with her smooth voice and perfect inflections and boom, this a great listen. Nice work from both author and narrator.

Audiobook received for an unbiased review.

What made the experience of listening to Trooper #4 the most enjoyable?

The plot is gripping and engaging, and I enjoyed the ending. With a great blend of themes and elements, the story will carry you through to the fun of a flipped story that keeps the listener guessing.

The narration is restrained and expertly paced. The story is conveyed through subtle changes in tone and inflection that suggests character, temperament, and state of mind. For the avid reader, audio performance is a convenience and an enhancement, especially in the case of this book.This one should not be missed!

What made the experience of listening to Trooper #4 the most enjoyable?

I did not know what to expect coming into this book. It was a surprisingly interesting listen. The story starts out slow but really picks up and keeps you on edge as it progresses.

What other book might you compare Trooper #4 to and why?

It is more like the TV show The Walking Dead, very Dystopian and zombie heavy. There are a lot of great twists and turns that easily keep a reader enthralled.

Awesome read, I loved her pace and tone. She has a terrific rasp to her voice that helps bring the main character to life. Her energy throughout the read makes the book move at a really steady read. I will definitely be looking for more of her reads.

A woman wakes up,she doesn't know who she is. This book was a very interesting.To say more on it,would give it away.I enjoyed it very much.Barbara-Creel narrated the story brilliantly!
I was gifted a copy through Audioblast for an honest review.

A woman awakens with a gun and a name badge and no memory of who the heck she was before this moment. She’s adaptable though, assumes the name Felice, and sets off to see what’s up.

What’s up isn’t anything good. Much of the world seems to have been burned to ashes and there are “screaming meemies” lurking about ready to suck the life out of you. Felice manages to find some food and a young boy who is also apparently suffering from amnesia. She takes it upon herself to protect him and to get to know him. I loved her then. How could you not?

So, you may be thinking this is just another post-apocalypse zombie-ish filled tale. Well, it is and it definitely is NOT. I know this makes no sense whatsoever but if I go into any sort of plot detail I’ll ruin it all for you and I’m not going to do that. I’ll only say that things take a unique turn and then another and though you may be confused here and there (or maybe that was just me) it all comes together in the end.

I love character focused books and Trooper #4 features a tough, smart and tenacious lead in Felice. She’s thrown into a confusing as hell situation and brings you right along with her as she tries to unravel everything that’s going on around her. She doesn’t sit around waiting for someone to save her or boo hoo about her situation. She digs in and figures things out on her own. She also has a snarky side which made me love her even more.

When someone gets overly complicated to show off how smart they may be she:

“Tuned out the techno babble. Really, who needed it?”

And, this description? Tell me you’ve never thought something similar about someone? (If not, you’re a nicer person than I’ll ever be!)

“The smirk on her face. The kind you wanted to smack off with sandpaper.”

Again, how could I not love her?

I listened to this book as unabridged audio and highly recommend it if you like a strong lead, twists, suspense and can deal with some plot confusion that gets cleared up. There’s nothing worse than a book that wraps up and leaves you confused, right? This isn’t that book. The story was expertly narrated by Barbara Benjamin-Creel . She has an almost musical voice that pulled me into the story from the very first scene. She does a beautiful job with Felice and the various other characters. I always knew who was who and she brought the scenes to life, something many a narrator fails to do, adding a depth to the story.

I can easily recommend listening to Trooper #4 if you’re looking for something different.

An interesting amnesiac view of the apocalypse

Would you consider the audio edition of Trooper #4 to be better than the print version?

I don't have the print version to compare with, but considering the great job the narrator did I would assume so.

What was one of the most memorable moments of Trooper #4?

The most memorable moments for me were the scenes with the people trying to get by in the new world the way it's been running.

I actually really liked the beginning, which probably has a lot more to do with the narration than the story itself, where the protagonist is trying to piece together what's going on and finds a child who's very much in the same state.

I received the code for this in exchange for an honest review. It was quite a satisfactory listen and I appreciated the new perspective (at least to me), that the author placed on the usual apocalyptic setting.

Where does Trooper #4 rank among all the audiobooks you’ve listened to so far?

I've listen to over 100 audio books from sources other then audible and this is in my top ten easily! The Story alone would be a top ten but the narration really put it over the top.

Which character – as performed by Barbara Benjamin-Creel – was your favorite?

T. Felice hands down, her timing on her lines were perfect.

What a fantastic story! Every so often, I come across a pretty unique and entertaining tale on audiobook, one where an author seems to have a new-ish idea. Sure, I love genre novels that really are just the authors take on a well trod story, but occasionally it is great to stumble across a gem like this.

Initially, the story started off with a tale that was somewhat reminiscent of the world of Silent Hill. Interspersed among the main tale are dream sequences of another story, which you can't see any correlation with the main thread. At the end it all comes together, and all makes sense. It is such a fun, intricate, and often dark novel.

The lead character's personal voice was great, and there were some pretty humorous thoughts the reader had access to (made me chuckle more than once). The narration was right on the money.

I look forward to more books by the author.

Yes. I would recommend this book to my friends who are literate fans of the post-apocalyptic genre.

Would you be willing to try another book from Noah Chinn? Why or why not?

Possibly. The plot uses a clever means of squeezing more life from a fairly well-worn genre. The internal monologues for the main character were entertaining and well read.

The main character's internal monologues have an authentic self-deprecating playful feeling to them... the kind of verve that pulls a character off the page and into the room with you.

Could you see Trooper #4 being made into a movie or a TV series? Who should the stars be?

Possibly a movie of the week or an installment on an anthology show.

This was my first audiobook and it was entertaining.

Would you try another book written by Noah Chinn or narrated by Barbara Benjamin-Creel?

I would have a look certainly

Was Trooper #4 worth the listening time?

It started so well and was really promising but after halfway I felt it got a bit lost in itself and I started to wane. The main character is engaging but the rest, well they were instantly forgettable for me.