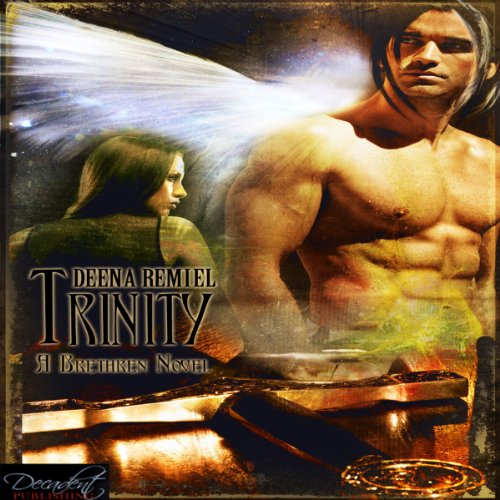 One way or another, terror will reign tonight.

School teacher and single mom, Emma Livingston, has been through hell and back, so she thinks. While dealing with the night terrors and active imagination of her five-year-old daughter Hannah, she attempts to lead a normal life. That is, until the demon from those nightmares pays her a visit, too, and threatens both of their lives. Desperate, she reaches out for help - and finds Michael waiting.

Michael D'Angelo is known to everyone in Prophet's Point, Arizona, as their loving elementary school principal. But to The Brethren, he is the most powerful Protector. Immortal and angelic does not mean he's without doubts or fears, as protecting Emma and Hannah from Evil tests his ability to fight his tortured past.

As the Trinity is formed, ancient secrets are revealed and faith is tested. When a prophecy is exposed, Hannah becomes the main target and Emma wonders if a normal life will ever be possible again. Hope is like an anchor, but can a mother, her daughter, and an angel overcome the evil determined to annihilate the world?

I hate to say I wasn't terribly impressed with this audio book, but of course, reading (or listening to the written word) is a subjective experience. For me, I would have liked more depth to the characters. I also like my heroes (particularly my paranormal heroes) to be a bit grittier and tougher than Micheal.

Michael is an angel, and his character was more in keeping with what is classically considered "angelic". Unfortunately, that didn't work for me. That he was also a high school principal, the heroine's boss, when he wasn't out fighting evil and saving the world was a bit, well..uh..huh?? Why? I mean, he didn't know who Emma was or what her role in his life would be beforehand. So why would an ageless immortal "protector" moonlight as a high school principal?

Emma is a teacher and the mother of an almost 6 year old daughter. She is, of course, the perfect mother. Her daughter is the classic "too cute for words" kid. Until Michael reveals that they have powers and are meant to join forces with the "Brethren" to fight evil.

There were slight (and I mean very slight) religious overtones to this book, like biblical names or phrases (ie. The Brethren), certain prayers that must be answered, etc, but in all fairness these are not a real distraction to the pure paranormal lover, and never made me feel as if I were being preached to. There was some rough language, which almost surprised me given the rather "gentle" quality of most of the book. The sex is on the tame side, and the sex scenes are very short, particularly compared to what is popular lately, but I actually found that to be a welcome difference. There was plenty of action that moved quickly, but steadily, and I found the pacing of the book to be pretty much perfect.

My real problem, I think, besides rather stereotypical characters, was the narration. I'm afraid Linda Velwest just didn't read the story with any sort of passion. She did make an effort and was, as best I could tell, consistent with the numerous male voices. However, her narration was stilted and her inflection was off. Really, it was quite a bland narration. I got this book cheaply with a whispersync deal, but I think I would have been none too happy if I'd spent a credit on it. Not exactly a waste of time, but pretty close.

What other book might you compare Trinity to and why?

Dark Gold by Christine Feehan, they both have an interesting love story, a dark supernatural plot, and both main characters have to protect a young child.

When Hannah said that she was afraid of “the little” her being pushed aside and her mom Emma promises to never let that happen. I was reminded that though Hannah has this power in her she's still a little girl who needs her mother.