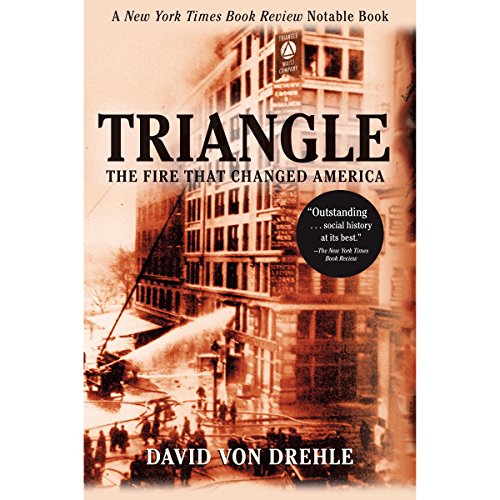 By: David Von Drehle
Narrated by: Barrett Whitener
Try for $0.00

On March 25, 1911, as workers were getting ready to leave for the day, a fire broke out in the Triangle Shirtwaist factory in New York's Greenwich Village. Within minutes it spread to consume the building's upper three stories. Firemen who arrived at the scene were unable to rescue those trapped inside: their ladders simply weren't tall enough. People on the street watched in horror as desperate workers jumped to their deaths. The final toll was 146 people - 123 of them women. It was the worst disaster in New York City history.

This harrowing yet compulsively readable book is both a chronicle of the Triangle Shirtwaist fire and a vibrant portrait of an entire age. It follows the waves of Jewish and Italian immigration that inundated New York in the early years of the century, filling its slums and supplying its garment factories with cheap, mostly female labor. It portrays the Dickensian work conditions that led to a massive waist-workers strike in which an unlikely coalition of socialists, socialites, and suffragettes took on bosses, police, and magistrates. Von Drehle shows how popular revulsion at the Triangle catastrophe led to an unprecedented alliance between idealistic labor reformers and the supremely pragmatic politicians of the Tammany machine.

David Von Drehle orchestrates these events into a drama rich in suspense and filled with memorable characters: the tight-fisted Shirtwaist kings Max Blanck and Isaac Harris; Charles F. Murphy, the shrewd kingmaker of Tammany Hall; blue-blooded activists like Anne Morgan, daughter of J.P. Morgan; reformers Frances W. Perkins and Al Smith. Most powerfully, he puts a human face on the men and women who died on March 25th. Triangle is a vibrant and immensely moving account of the hardships of New York City life in the early part of the 20th century, and how this event transformed politics and gave rise to urban liberalism.

What listeners say about Triangle

The "Triangle" book furnishes every possible detail regarding the sad fire, the victims, and. The aftermath. As a historic reference work it is great, but as an audio book it's so filled with facts, figures, columns of names that it is difficult to keep track. An audio version would do well to be about half the length. Even better would be to purchase the book version so that the reader can easily flip back and forth to verify names and timeline. On the plus side, the narration is excellent; crisp, clear and the perfect tempo.

I so enjoyed this history, which takes the fire at the Triangle Shirtwaist Factory as its core. Although focusing on the factory, its workers and bosses, and the fire, the author also examines all the other historical pieces that contributed and the results afterwards.

I thought the performer was excellent.

Wonderfully told history of a tragic event. I’m a student of this fire and the Wyncoff Hotel fire in Atlanta. Touching & thoroughly explores all issues & personalities. Thank you.

strikingly truth to wealth and privilege

clearly the politics of the day drove both the rise of the labor movement and the failure of the justice system. only one has changed in the century to follow. good read and thought provoking.

As I began listening and then got deeper into the book, I kept asking myself, what about the fire? This book is not really about that factory fire on March 25th, 1911, but about the politics of rallies, strikes, intimidation, and unions in New York City surrounding labor laws. This book went on overload for hours about labor leaders, immigration, and Tammany politics - everything but the fire. And when it finally appeared (6 hours into the narration), it disappeared just as quickly. This was a very disappointing boring read by a narrator who sounded as uninterested as I was. I struggled to get to the end. If you are interested in learning about the humanistic side of the Triangle fire, find something else -this is all about politics. I do NOT recommend this book.

Full background of the political and labor influences and the fire itself. Doesn't forget victims.

The reviewers that complained that the book dealt with other factors other than the fire are short sighted. The book is exactly what I wanted. It provides the historical backround of the fire. The battle between the garment workers and their bosses. The socio-economic conditions of the workers. The people that complained that the book covered more than the fire are probably watching too many cop shows, and need an adrelaine rush. My advice go see a scary movie.

The book is about my ancestors, the mostly Jewish garment workers and bosses in NYC, so I've always been curious about their conditions. And in fact I briefly worked for a button works Co. in the early seventies - back when cutters had a good trade before the entire industry went overseas. So I have some idea of the layout of Triangle.

I highly recomend the book, like most of the reviewers on the Amazon website. The reviewers that said the book was too political are the same right wing people who never want to hear about union struggles even when it is definitely part of the history. The book would be pretty mediocre if it dealt only with the fire.

This book appears to have been extremely well-researched and was fascinating to read about both the events leading up to the fire, as well as gaining more of the social, political and historic context for these events.

Am very glad I read (& listened) to this book as I learned things about that time period and the fire that I never knew - as well as how significant this event was in shaping future laws and political direction. The beginning portion of book was a bit dry, largely due to all of the social/political context and straight history (almost read like as a textbook), but it was a compelling read overall, and very well-done.

Amazing. Though it's a nonfiction book, it paints a picture with a narrative that feels like fiction to put the reader right there among the strikers and the fire victims. This story should be required for everyone studying women's history.