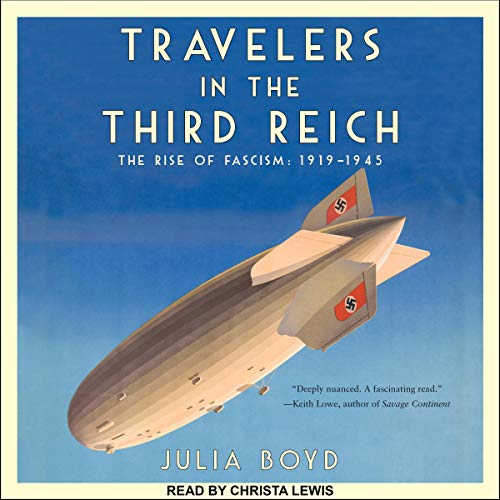 Travelers in the Third Reich

By: Julia Boyd
Narrated by: Christa Lewis
Try for $0.00

This fascinating and shocking history of the rise of the Nazis draws together a multitude of expatriate voices - even Charles Lindbergh and Samuel Beckett - into a powerful narrative charting this extraordinary phenomenon.

Without the benefit of hindsight, how do you interpret what's right in front of your eyes?

The events that took place in Germany between 1919 and 1945 were dramatic and terrible, but there were also moments of confusion, of doubt - even of hope. How easy was it to know what was actually going on, to grasp the essence of National Socialism, to remain untouched by the propaganda, or predict the Holocaust?

Travelers in the Third Reich is an extraordinary history of the rise of the Nazis based on fascinating firsthand accounts, drawing together a multitude of voices and stories, including politicians, musicians, diplomats, schoolchildren, communists, scholars, athletes, poets, fascists, artists, tourists, and even celebrities like Charles Lindbergh and Samuel Beckett. Their experiences create a remarkable three-dimensional picture of Germany under Hitler - one so palpable that the listener will feel, hear, even breathe the atmosphere.

These are the accidental eyewitnesses to history. Disturbing, absurd, moving, and ranging from the deeply trivial to the deeply tragic, their tales give a fresh insight into the complexities of the Third Reich, its paradoxes, and its ultimate destruction.

What listeners say about Travelers in the Third Reich

Everything about this book from the craftsmanship of sentences to the compilation of different memoirs to the tone and cadence of the narrator was excellent. The book was truly enlightening with regard to this tragic period of history.

interesting from start to finish. lots of scenes which surprised and shocked me, particularly upper class Brits who felt more at home in Hitler's Germany than in democratic Britain. the more things change, and all that.

The world failed to confront Hitler and the Third Reich when doing so could have stopped the conflagration his policies caused. It’s never a good idea to let extremism get established.

I really found this book interesting. It gave a completely new view of the daily life during this period in Nazi Germany (before and during the war). It shows how propaganda can have a huge impact on normal people (native and foreign).

This is a unique book, a set of unique diary, letter, journalistic recollections, mostly by travelers to Germany from the UK and the United States, but not entirely so. It shows that some visitors were not willfully blind to what was going on, but were just focused on their own activities, as if with blinders on (& sometimes with blinders placed there by their German hosts), while others were quite clear-eyed about the situation (militarism, the jews), sometimes publicly critical, sometimes just privately. Then of course, there are the well-known fools/sometime collaborators, the like of Lindbergh & his wife, the recently resigned King of England & his wife, anti-Semites from various places, anti-communists who like the fascist line. The book is well written. I have given the narrator a ding for not knowing how to pronounce some words & names (most strikingly, the name of WEB Dubois), which I found annoying. But aside from those errors, her narration too was excellent.