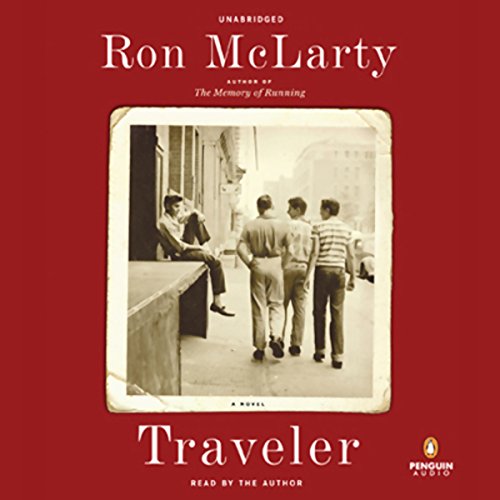 Jono Riley is an aging bartender and part-time actor in Manhattan who specializes in one-character plays, usually performed in front of an audience sized in the low one digit. He still lives by himself in an Upper East Side walk-up, and though he's got a great girlfriend, a firefighter named Renee, his life is stuck and his acting career is going nowhere fast. News of the sudden death of his childhood friend Marie D'Agostino, his first true love, compels Jono to return for a few days to the place he grew up, the working-class neighborhoods of East Providence, Rhode Island. McLarty weaves the story of Jono's return with that of his coming-of-age in the early 1960s, including the story of a series of mysterious shootings, one of which lodged a bullet in Marie's back when she was 12.

When Renee joins Jono in East Providence, they find themselves drawn into an attempt to find the person responsible for the shootings so long ago. As the truth emerges, Jono is forced to come to terms with a past that is not quite what he remembers.

What both readers and critics alike celebrated in McLarty's first novel - the main character you come to root for, the funny, pitch-perfect dialogue, the writing that is so full of warmth and drama and authenticity - is here again in this fine-tuned and riveting new novel.

"Unforgettable.... This novel has a great voice, a great plot, great suspense, a great evocation of time and place." (The Boston Globe)

"McLarty excels at creating a sense of place, but he is positively brilliant at creating characters. We care about these people." (The Providence Journal)

What listeners say about Traveler

I have listened to "Memory of Running" several times, and found it inspiring. I got "Traveler" because I liked Ron McLarty's reading voice, but the book was surprisingly deep and the voice was just as good. I have already listened to is twice. One of the best books ever.

I loved McLarty's book, Memory of Running, so I had high hopes for this book as well. It was okay, but for me this story just didn't have that special quality. It is a fine solid book, I don't regret listening, but oh the other. I suppose this is an author's curse, having readers compare. McLarty delivers the feel and character of Jono's neighborhood perfectly, the story-line just didn't keep me so engaged this time though.

Mclarty does it again. Using the tale of the present with moments of the past. He spins a great tale with a surprise ending. It is easy to associate with his tales of growing up and having best friends. He does a great job of weaving a store , that shows how what has happened in the past effects what is happening today.

Mclarty also is one of the best readers today in the audiobook business.

Traveler is as good as memory of running. I really enjoyed it

Ron Mclarty is back again with another easy listen. Although the novel is probably classified as drama. humor can be found in every chapter. The story is quick and easy to follow.
Although The Running Man, also by Ron Mclarty is still the best the Travler should not be ignored.

Great Story read by the author

Would you consider the audio edition of Traveler to be better than the print version?

I was first introduced to Ron McLarty with "The Memory of Running" which I loved and still go back and listen to again from time to time. This one is a different story with a similar feel. It all takes place in Rhode Island, near where I live, so this really great story has a special "hook" for me. Give it a listen, you won't be able to put it down. I have listened to this one several times and it still has appeal to me, like a favorite movie.

What other book might you compare Traveler to and why?

The Memory of running

Have you listened to any of Ron McLarty’s other performances before? How does this one compare?

If you could rename Traveler, what would you call it?

What did you love best about Traveler?

The plot was unique, with views of current and past.

It was a very good story line, but having heard a prior interview with the author/narrator, I enjoyed the times in which he referenced the characters he actually played on Law and Order and Cop Rock. Very fun.

Which character – as performed by Ron McLarty – was your favorite?

I loved the ensemble - but had a soft spot for the caring policeman.

I love the writing and narrating style of Ron McLarty. I want MORE! Also enjoyed The Memory of Running.

A true and engaging voice

The rich beauty of this book is in the characters and the place McLarty offers, and the 'natural' story of their lives. The mystery and its resolution is a bit of a contrivance that doesn't quite hold with the bulk of the story (and specifically I did not get how Kenny Snowden apparently pieced it together and what he must have said in his call to Jono).
I was entranced with the characters, 1960s East Providence, and McLarty's narration. Perhaps it falls short of the extraordinary Memory of Running, but not by much.

I was excited to read this new offering from McLarty as I really enjoyed Memory of Running. Traveler definitely stands up on its own – deeply engaging characters, great dialogue, and endlessly interesting scenery descriptions. There’s a lot from MofR in here as well .... subtle references such as the Ide retirement home etc. that reference his first book … not to mention the same location, time period, Vietnam War injuries etc. But where MofR excelled – a slow, beautifully timed reveal combined with the compelling transformation of the main character – this book falls way short. In the end, Traveler just doesn’t travel very far. The story starts with great promise, then fizzles into an embarrassingly clich? ending (yes, the villain insists on telling all at the height of the final conflict.. what a surprise). The last third of this book needed more time to write, and a much better ending. McLarty’s narration, as always, is absolutely top notch. Hopefully McLarty’s next book will live up to the promise of his first.

with the memory of running as my all time favorite book, traveler comes in right behind. I've never read a book where the author can so easily touch the complexities of life. whether real day, grown up or the trials of teen years, Ron is amazing in his ability to weave a complete story!

Another great book by Ron mclarty

This was another great book by Ron mclarty. The plot is great and the characters are wonderful