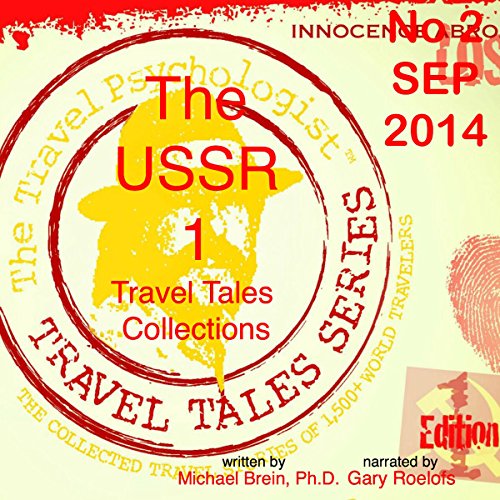 By: Michael Brein
Narrated by: Gary Roelofs
Try for $0.00

Michael Brein's Travel Tales Collection: The USSR 1 features three wild travel tales of unbelievable things that could have happened to you during the old Cold War Soviet Union communist era.

Of course, there are always the usual, typical, expected sorts of Eastern Europe (a la the Cold War) experiences. But there are also those incredible unexpected surprises that become all the more memorable just because they are so unique!

The Travel Tales Collection: The USSR 1 features three Cold War, communist era Soviet Union stories of international intrigue in the form of spies, the KGB, the Secret Police, and even bugged hotel rooms. Just because you're paranoid doesn't mean they're not out to get you!

The Travel Tales Collection: The USSR 1 is part of Michael Brein's Collections travel tales series and contains among the best travel stories from Michael's huge collection of travel tales that he has gathered in interviews with nearly 1,750 world travelers and adventurers during his four decades of travel to more than 125 countries throughout the world.

Travel Tales Collections are groups of three or more very interesting similar travel stories of a kind on a variety of very specific travel subjects, themes, or countries, such as close calls, great escapes, pickpocketing, scams, safety and security in travel, Paris, Morocco, Mexico, and so on. Eventually, several hundred Collections on all sorts of specific travel subjects, themes, and countries will be available.

What listeners say about Travel Tales Collections: The USSR `

Just don't. Even if it's discounted your time is still to precious to spend on this book.