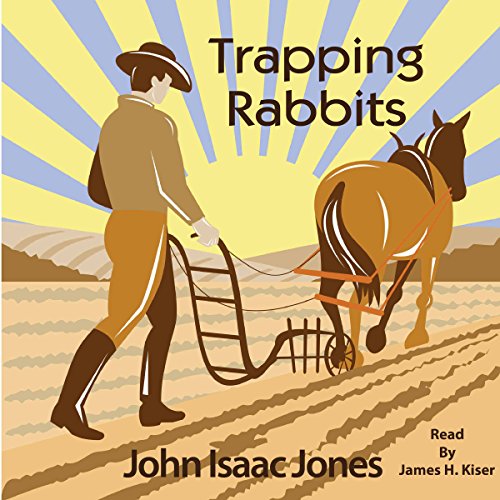 This short story is a testimony to the depths of parental love.

One day in June of 1951, Billy Johnson's father delayed plowing long enough to teach his son how to trap a rabbit. In the past, he had never seen his father delay plowing for any reason, especially when he was using black hired hands.

Over the years that followed, he always assumed the motive for the lesson was nothing more than a father who was an avid sportsman teaching his son to trap a rabbit. After his father died, he learned differently.

What listeners say about Trapping Rabbits

This is a sentimental tale about the lessons passed from a father to his son. When Billy's father taught him how to trap a 🐇 he had no idea what a valuable lesson his father was giving him. After his father's death, Billy speaks with his aunt and the conversation brings to light the importance of this passed on knowledge.
I love book's with hidden meanings in them. This one makes you revisit your own childhood and value the wisdom you took for granted as a child. I voluntarily requested a copy of this book in exchange for my honest review.

Not for those who believe in painless death to ani

This is a short story where a father teaches his son Billy how to trap and kill rabbits. Only years later Billy will understand the full meaning of it all.

I always enjoy stories about knowledge passed from old to young generations. I liked the descriptions of the farm where Billy’s family lived and worked. There is not a lot of character development due to the shortness of the story, but its meaning is quite clear.

I think, though that the story would need to be more polished. I felt there was a long built up and then the end was a bit rushed, without further details about Billy’s father.

Something I did not enjoy was the explanation about how to kill the rabbits. Basically it was either breaking their neck or beating them to death. Nowadays that we try to promote a dignified life for animals, beating an animal to death is just not something acceptable. I’m not a vegetarian, I eat meat, but whenever I can I try to source meat from animals that had a dignified life and the most painless death possible. I understand killing to eat but I just don’t understand killing in a way that makes an animal suffer.

James H. Kiser was clear but monotone. He did not inflect any emotion in the dialogs, and all voices sounded the same. It was okay though, but not something that made the story more enjoyable.

A great little short story. Well worth a listen. I found the narrator a tad monotone so it wasn’t my favorite. But still I loved the story.

A good story about a lesson learned. James H. Kiser was godd for this reading.“I was voluntarily provided this free review copy audiobook by the author, narrator, or publisher.

A very interesting short story. Listened to the audio version, the narrator’s voice fit the book/story. A young boy learning from his Father and and about how some provide their family. My first book by John Isaac James and I look forward to more.

This little piece of historical fiction centers on Billy Johnson. In 1951, he’s just a kid and it’s plowing season. Billy’s dad and two Black farm workers (Rufus &amp; Calvin) are hard at work with the mules when a little rain shower comes along and work is paused. Billy’s dad doesn’t waste the time but instead uses it to teach Billy the useful skill of catching and killing rabbits.

I really liked this part of the story because it’s set on a farm, there are mules (I used to have donkeys and one of them was trained to plow), and there’s some parent-kid bonding going on. In today’s world of industrial meat farms, catching and killing rabbits isn’t a common skill to pass down but I think it’s a useful one to have. The author didn’t hold back on how to capture and kill rabbits, nor did he make the descriptions gruesome. It was simply a useful skill being passed on from one generation to the next.

The story is catapulted into 1975 for the second half of the tale. Billy is a functioning adult with a job and aspirations. In a conversation with a shoestring relative, he’s flung back to that moment in 1951 where his dad taught him about rabbits.

I was intrigued by the second half of this story. It was interesting to see Billy living and working in near-modern world with office buildings and packaged foods. However, the tale ends rather abruptly. I was left wondering what the point was and how Billy was affected by this unexpected trigger in 1975 that brought back 1951. I would have liked just a little more to finish this story out. We don’t know if Billy’s dad is alive in 1975 or not. Perhaps Billy would give him a call or visit his grave or simply toast his memory with a scotch.

In short, the tale started off interesting and gripping. Then there’s the sudden jump in timeline but the story holds promise for interesting times. Then it simply ends abruptly.

The Narration: James Kiser was a good fit for this story. He had a kid voice for Billy and then an adult voice for him. There was only 1 female character but Kiser had a believable voice for her. He captured the dramatic bits as well as the in-between moments well.

Going Home by John Isaac Jones was a good quick read. Archie is preparing for his death in the electric chair. They were about to pull the switch when he remembered that there were some things he wanted to take care of.

Fabulous short story in which a dad takes time out of his work day to show his son how to trap rabbits. The son enjoyed the time with dad, but was a little confused about why this lesson happened. As with all short stories there is more than meets the eye (or ear, this is audio!) and the son learns just why this was a skill his dad wanted to pass down to him.
Family relationships, family history, love and survival are all themes to be found here. Great story!
I was given this audio book at my request for free in exchange for an honest and unbiased review.

A touching story of father and son

In this short story John Isaac Jones has crafted a touching story of father and son. It tells of a day in Billy Johnson's life where his father does something strange and out of character - stopping work for a while to teach his son how to trap rabbits. A strange day that always stuck with Billy, he only much later finds out the full reasons behind the lesson.

The story is heart warming in it's simplicity, with the ending giving information that colours the rest of the story. Due to the short length of it I went back and listened to it again, with full knowledge of the ending and it all works well together.

I actually found narration by James H Kiser to take away from the story a bit. He is fairly monotone in this reading (although not completely), but because of that he just breezes past the emotional cues in the story. The impact of the story and the revelation is actually lost in his narration because it makes it so hum drum. There is no emotion, no 'penny drop' moment in the narration.

He is clear and easy to understand, while on the slightly quicker end of the narration speed scale (which also make it feel like he is trying to rush past rather than emphasize the emotional impact).

Still, even with the lackluster narration I enjoyed this short story.

A generational passing of values.

This is a short story of the passing down of values, both spoken and unspoken, from father to son. It's a brief glimpse of a memorable day in the life of a young boy farming along side his father. It tells of the strength of the fathers practical example to his son as well as the imparting of a bit of training which takes the son a couple of decades to fully understand the significance of.

I was given this audio book at my request for free in exchange for an honest and unbiased review.