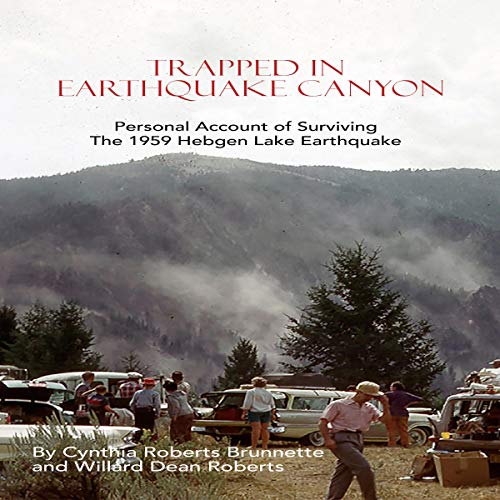 Objects flew at us in the dark. Cupboards, pans, and dishes were all over, grinding and smashing violently. A forty-gallon water tank and a large iron stove hit the floor simultaneously. The logs of the cabin squealed and groaned. Terror gripped my heart and panic seized me. Though I knew that my wife was beside me in bed, I had no idea what was happening to the children. “My babies! My babies!” came Gloria’s cry. (Dean Roberts)

It was the summer of 1959 when the Roberts family decided to take their first vacation in five years. When they reached West Yellowstone, Montana, a fateful decision was made to continue on until they arrived at the majestic Madison Canyon below the Hebgen Lake Dam. A rustic cabin was rented in a peaceful and serene location along the Madison River. They went to bed dreaming of catching rainbow trout, hiking mountain trails and observing wildlife. At 11:37 pm, their dreams turned into night terrors when they were jolted awake by a 7.5 earthquake!

They tried to escape. In one direction, the road was blocked by a deadly mountain slide and in the other direction, the highway had dropped into the lake.

They were trapped in Earthquake canyon!

Trapped in Earthquake Canyon is the true story of a family surviving the 1959 Hebgen Lake Earthquake.

What listeners say about Trapped in Earthquake Canyon: Personal Account of Surviving the 1959 Hebgen Lake Earthquake