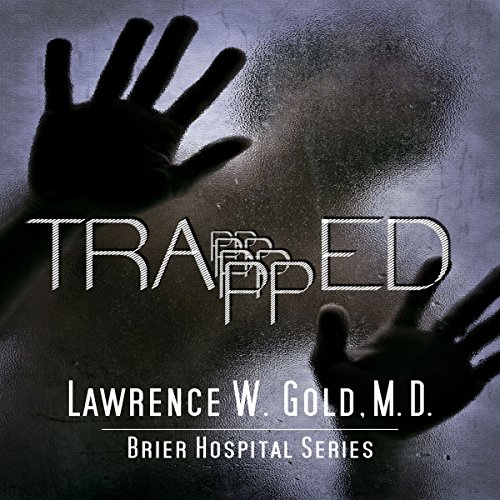 While medical students suspect that every headache is a brain tumor and that every chest pain is a heart attack, experienced physicians know diseases along a spectrum of horror-the ones they dread the most. Among these are cancer, Alzheimer's, stroke, diabetes, and ALS (Lou Gehrig's disease). As the list continues, we come upon locked-in syndrome, a neurologic disease where a victim is awake and alert, but cannot move or communicate due to paralysis of all voluntary muscles in the body except for the eyes.

In Trapped, a Brier Hospital Series novel by Lawrence W. Gold, M.D., the listener enters the neonatal and the adult intensive care units. Medical fiction works, not only due to its intrinsic drama, but because of the crucial ethical issues that arise, especially in intensive care.

Lisa Cooke is the product of a passive mother and an abusive father. She finds her way into pediatric nursing, a world filled with men in control, especially the director of the Neonatal ICU, Mike Cooper. As Mike reminds Lisa of her father, it's no surprise that they don't get along. Ultimately, they fall in love and have a fulfilling marriage except that she's unable to have children. They try everything, but fail.

When an automobile accident severely injures Mike, Lisa is devastated. Shortly afterward, she discovers that she's pregnant. Mike's injuries are life threatening, and he nearly dies on several occasions. Mike suffers from locked-in syndrome and his survival is constantly in jeopardy, as is Lisa's pregnancy. Will he/she/they survive?

What listeners say about Trapped

I always enjoy a medical mystery. Makes even the doctors and nurses that take care of us appear human. Some times in person, they don't.