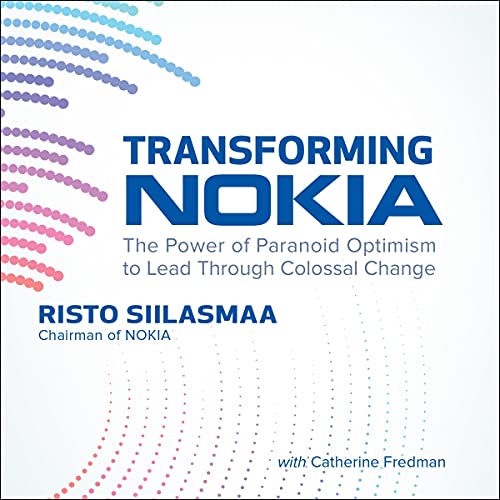 By: Risto Siilasmaa
Narrated by: Doug Greene
Try for $0.00

The great Nokia turnaround - universal business lessons for leaders in any industry.

Nokia once dominated the smartphone industry. It was to mobile phones what Kleenex is to facial tissues. Then iPhones and Androids appeared out of nowhere and pushed Nokia off the cliff. In just four years, the company lost more than 90 percent of its value. Revenues were in freefall; massive layoffs became common. Pundits predicted that bankruptcy wasn't a matter of if, it was a matter of when.

Then something equally shocking occurred. In record time, Nokia bounced back. With a vengeance. Nokia reinvented itself and is now the second-biggest player in the $100 billion-dollar global wireless market.

In Transforming Nokia, the man who orchestrated and led Nokia's comeback - Chairman of the Board Risto Siilasmaa - reveals the story of Nokia's fall and resurrection. He reveals the inside story of the collapse and provides survival strategies and change-management methods any business leader can take to the bank. You'll learn how to harness the power of what Siilasmaa calls “paranoid optimism” and apply his winning entrepreneurial leadership model to rise above any challenge and drive sustainable success.

Whether you lead a team or a corporate division, head a start-up or a massive organization, and whether your business is on the rocks or running smoothly, Transforming Nokia provides everything you need to sharpen your foresight, expand your options, seize opportunities, and thrive, no matter what changes tomorrow brings.

What listeners say about Transforming Nokia