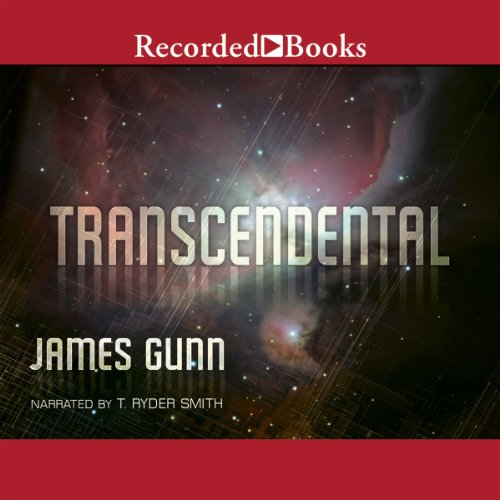 Transcendental, an epic, high-concept space opera, is a Canterbury Tales of the far future in which beings from many planets hurtle across the universe to uncover the secrets of the legend of Transcendentalism. Riley, a veteran of interstellar war, however, is not journeying to achieve transcendence, a vague mystical concept that has drawn everyone else on the ship to this journey into the unknown at the far edge of the galaxy. His mission is to find and kill the prophet who is reputed to help others transcend. As the ship speeds through space, the voyage is marred by violence and betrayal, making it clear that Riley is not the only one of the ship's passengers who is not the spiritual seeker they all claim to be. As tensions rise, Riley realizes that the ship's journey is less like the Canterbury Tales and more like a harrowing, deadly voyage on a ship of fools. Looking for allies, he becomes friendly with a mysterious passenger named Asha, who, like so many others on the ship, is more than she appears. But while she professes to be just another pilgrim, he comes to realize that like him, she is keeping secrets could be the key to Riley's assignment, or might make him question everything he thought he knew about Transcendentalism and his mission to stop it.

What listeners say about Transcendental

The story was interesting enough to carry me through, but characters frequently take actions which do not seem to be in their own best interests or otherwise make sense to me. Even aliens should have some consistent motivation. I am not sure if that was the author's attempt at making characters seem more inscrutably alien or lazy plotting in this case. I am considering the next book in the series, but it is not on my must buy list at this point.

This was a very good book and a great narration

I found this because of the Narrator and I am very pleased with the story. I plan on reading any sequel and that's the highest compliment I can give any book.

Solid story. I would buy more. The narrator did a fine job. I recommend it to all sci fi fans. Hi Sarah and John.