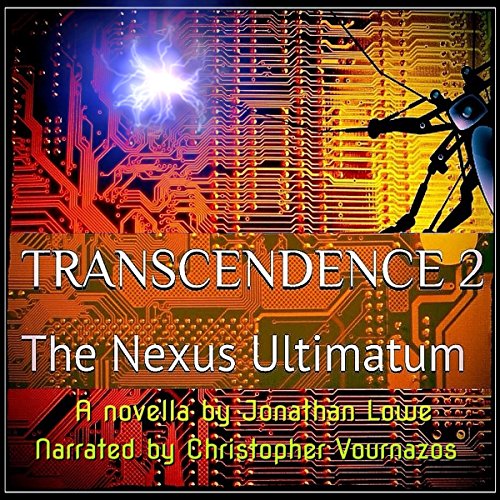 By: Jonathan Lowe
Narrated by: Christopher Vournazos
Try for $0.00

Will the rise of machines result in our becoming slaves? What is the human consciousness? Science fiction fans whose typical Hollywood diet of future killer robots may not have considered the very real possibility that, when quantum computing gives rise to artificial intelligence, its rate of technological advancement will not only become exponential, but it will apprehend quickly (and scarily to us) who we are, and who IT is, especially if this A.I. has instant access to all human knowledge (and so would be able to make connections both faster and never before conceived). Such a being would seem like a god, and there is no reason to assume it would have our human, ego driven flaws. In fact, it may intend to save us from ourselves...but in a way that might be even more frightening than the extinction we are moving toward in our own insanity.

What listeners say about Transcendence 2

I loved the fast pace, and the story kept me engaged and constantly wanting to keep listening. The ending was a pleasant surprise as well, much different from what I expected and from the sort of ending that is often typical for stories in this genre. I highly recommend this for anyone who likes sci-fi.

Great story. Fast-paced hard sci-fi with a pretty chilling premise. A pleasure to listen to, really well done. Excellent performance by the narrator as well!

they could use a female voice for female character. .....

It is a fast pace book and the story kept me engaged and constantly wanting to keep listening. I was pleasantly surprise and, much different from what I expected and from the sort of ending that is often typical for stories in this genre. I highly recommend this for anyone who likes this genre

I'm Fine Thanks. And You?

A great novella by Jonathan Lowe. A story about our probable future with excellent detail.
Nano robotics, artificial intelligence and Nexus. Scary but so real.
This was an awesome listen and I wish it were longer. Loved it.

About the narrator: Christopher Vournazos has a terrific voice. He has a good range and great voice inflections. So happy to hear yet another great male voice actor. I really look forward to hearing more from him in the future. Excellent job.

Audiobook received foc in exchange for an unbiased review.

Short story in the style of the old sci-fi masters

What made the experience of listening to Transcendence 2 the most enjoyable?

Lowe manages to pack in the social, the political, and the personal in a single, hour-long story about a government-related computer project gone rogue (literally, the computer gone rogue). His wryly humorous protagonist seems the most grounded of them all--or perhaps the mostly deeply in denial--about the future being shaped for the planet by the Nexus system. Lowe wisely leaves the story with room for interpretation--and further development. I for one would enjoy hearing this story either retold from multiple perspectives or with additional subplots/characters, creating a series of short stories or in essence a full-length novel from this novella.

Timely Tale For The End Of Time.

Would you listen to Transcendence 2 again? Why?

What was one of the most memorable moments of Transcendence 2?

The coming together of science fiction and the real world.

Easy voice to listen to.

The ending seemed to tie it all together nicely.

Would you listen to Transcendence 2 again? Why?

Yes, it was engaging and thought provoking.

The author seems very well acquainted with the intricacies of technology and human nature.

What does Christopher Vournazos bring to the story that you wouldn’t experience if you just read the book?

Christopher Vournazos gives the characters life and personalities through his portrayal of their voices and emotions. He is brings the story to life in a way written words can not.

Several, as what was behind the unexpected events was realized.