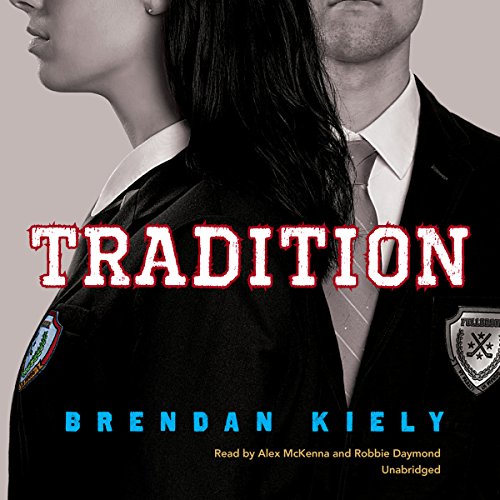 By: Brendan Kiely
Narrated by: Alex McKenna,Robbie Daymond
Try for $0.00

From New York Times best-selling and award-winning author Brendan Kiely, a stunning new novel that explores the insidious nature of tradition at a prestigious boarding school.

Prestigious. Powerful. Privileged. This is Fullbrook Academy, an elite prep school where history looms in the leafy branches over its brick walkways. But some traditions upheld in its hallowed halls are profoundly dangerous.

Jules Devereux just wants to keep her head down, avoid distractions, and get into the right college, so she can leave Fullbrook and its old-boy social codes behind. She wants freedom, but ex-boyfriends and ex-best friends are determined to keep her in place.

Jamie Baxter feels like an imposter at Fullbrook, but the hockey scholarship that got him in has given him a chance to escape his past and fulfill the dreams of his parents and coaches, whose mantra rings in his ears: Don't disappoint us.

When Jamie and Jules meet, they recognize in each other a similar instinct for survival, but at a school where girls in the student handbook are rated by their looks, athletes stack hockey pucks in dorm room windows like notches on a bedpost, and school-sponsored dances push first-year girls out into the night with senior boys, the stakes for safe sex, real love, and true friendship couldn't be higher.

As Jules and Jamie's lives intertwine, and the pressures to play by the rules and remain silent about the school's secrets intensify, they see Fullbrook for what it really is. That tradition, a word Fullbrook hides behind, can be ugly, even violent. Ultimately, Jules and Jamie are faced with the difficult question: can they stand together against classmates - and an institution - who believe they can do no wrong?

What listeners say about Tradition

Powerful, a must read! Long overdue issues that needed to be brought to light and this book is the perfect vehicle for those discussions to take place!

Two narrators take on the telling, of an attempted rape and the aftermath, how it affects both the victim and her friends as well as how the school and other students react.

Jules, from the very first time we meet her, shows us just what we are meant to feel about her - she's handing out 'safe sex' information to students on their first day at the prestigious Fullbrook. She's a 'rebel', she doesn't play by the rules but is worthy, smart and well-intentioned. Her male counterpart is Jamie. He's had to leave his previous public school for reasons undisclosed and managing to attend the private school with a hockey scholarship, and we soon see he doesn't fit in with the typical mindset of the young men who are students there.

I was curious as to where this was heading. Jules and Jamie both are outsiders to the traditions of the school, neither is willing to let things stand, and both are tested as events mean they have to choose between conforming and letting things lie, or standing up and making a stand, fighting back, being heard.

It's a tough one to 'grade', I enjoyed listening to this, the two narrators sounded adolescent enough and they made the pretty mature and intelligent pair sound authentic, but something didn't sit quite right. After considering, I think it was Jamie - he's an outsider, and has a past. It seems that if it wasn't for his own issues then he probably wouldn't notice the problems with Fullbrook. So is it only those outside of the system that would see the flaws?

Jules I liked from the start (and that's not to say I didn't like Jamie too). Her situation is a hard one - she ISN'T raped (it's not a graphic scene), but she is not prepared to keep quiet. When readers see what goes on in the school, it is obvious that something has to be done. But there was the flaw for me, even as I enjoyed it, the conclusion is less than spellbinding, it's a little deflating and I think I said to myself: "Is that it?"

I liked the topic and setting, the distasteful and lurid ideologies of the students and the main pair we are rooting for, but it could have been more.

The audio version is well-narrated by two readers covering Jules and Jamie, making them teenagers you care about. It was the right format for an audiobook, flitting between their points of view fairly sequentially and with lots of narrative thought and speech.

A popular topic at the moment, it unfortunately doesn't stand out as a genre leader, but does add a persepective of its unlikely setting.

With thanks to Nudge Books for providing a sample Audible copy. (less)