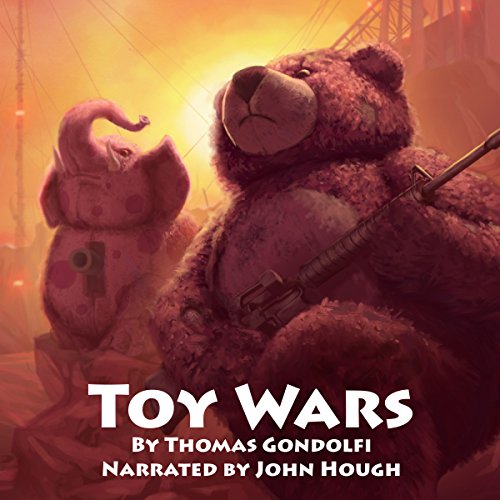 By: Thomas Gondolfi
Narrated by: John Hough
Try for $0.00

Don wakes from a normal manufacturing process as a two-meter, sentient teddy bear sporting purple fur. He learns he is the result of a desperate gamble by an autonomous factory with hashed programming. To protect his home, his way of life, and his creator, Don must lead other killer toys across a harsh alien landscape to battle the native fauna of Rigel-3 and even his own kind.

His discoveries change not only his view of the wars, but his own human gods. In spite of these trials, Don's harshest test may be getting his own brethren to believe his adventures and the soul-churning changes needed to survive.

What listeners say about Toy Wars

This is a very clever book.

Humanity has discovered how to travel at FT2L, the double of FTL, Faster than Light Speed. There is just a problem: organic matter will not survive traveling at this speed, so ships able to travel at FT2L will just transport semi-intelligent central units (named factories) able to construct robots in order to mine far away planets and collect precious inorganic materials. Just before the take off of six of these vessels, a hacker gets into the system and leaves a virus by accident, making those six ships to aim for the same planet, and switching the robot plans for toy blueprints from a toy factory. Four ships make it to the planet and start production successfully, but as one of the goals is gaining complete control of the planet, they will start fighting each other to gain supremacy.

The experiments of one of the factories on Teddy 1499 will make him become sentient, and with time he will realize that they are just fighting other factories and that the only way to reach their goals will be to find peace and unite. This is the journey of Teddy 1499 on this new world, fighting for something nobody believes in.

This is a very clever book. The name sounds almost cute, but there is nothing cute about this book. I would consider it hard sci-fi, and a kind of experiment mixing some out of the normal elements. Two meter teddy bears with guns, big elephant dolls, nurse nuns patching the fallen in battle. This is the normal world for Teddy 1499, who starts questioning how things work and experiments thinking 'outside the box'. This story is one of those that could have been born after a 'what if'.

I enjoyed the experiment but it took a long time to take off. I think Tom Gondolfi spent too much time with the exposure. It is not that it did not have useful information. It had, but I found it a bit distracting, and I was impatient to start the story.

I enjoyed the evolution of Teddy 1499, and how he was also amazed by it. We travel a long journey with him and it is impossible to not feel something for him. In a way, it is an endearing story.

John Hough's narration was clear but I found it a bit too theatrical at times. It could have been appropriate, since he was giving voice to toys, but I think I would have preferred a more neutral narration. It was very good though, and the production had a high quality.

This book is not for everybody, not even for every science fiction lover, but I would recommend it to anyone who enjoys hard sci-fi and would like something different.

Beware of the toys...

What can go wrong when a hacker programs a fleet of factory mining ships, destine for a faraway planet, with blueprints from a toy shop instead of the usual heavy-duty machinery required for the task? Thomas Gondolfi answers this question in his book “Toy Wars”. Ever wanted to read about a teddy bear army with machine guns, or a sniper giraffe, or how about a pink poke-a-dot brute elephant? Don’t get me wrong, this is not a kid’s story nor is it a light hearted and fluffy story about toys. Not at all.

Toy Wars at times is a light hearted and fun story, however the author also focuses on many complex and deeper topics in this book than just toys. He does a great job of bringing the many characters to life and shows their many different struggles. John Hough does an excellent job narrating the book and its many characters. I was easily brought into this unique world and did not want to leave until it was done. The story is detailed and I could see it being made into a movie, but audiences may be confused if it is a kids or adult movie. I found it refreshing that this was not a series, but it was so good I look forward to other material by this author; maybe in the same world.

I want to say that I went into this book because of the many positive reviews, and I was not disappointed after I had finished it. It was a little science fiction with its space travel, futuristic with the factory AI (discussed later), but the author also included many aspects around friendship, relationships and the desire to survive no matter what one’s programming says. The best way I can describe this unique story is to think “The Martian” but with toys. Stranded on a planet where nearly everything, including your own creator, wants to kill you takes tenacity. The main character suffers in many ways, be he also overcomes only through the help of others.

In the future, humans are still unable to travel at the speed of light to reach distant planets. However, they quickly discovered that non-living objects could be sent to these planets and mine the precious resources; afterwards returning them to earth. Man programmed these factory ships to travel to a single planet, destroy the local inhabitants, and strip it of the required resources. Once done, the resources would be sent back to Earth.

This all seemed like a good plan until a hacktivist penetrated the code of three of the ships prepared to depart and directed them to all land on the same planet while also uploading schematics of a toy producer replacing those of the machine equipment that will be constructed once it arrives on the planet. Upon their arrival, not only do the factories (Ai) start to turn our unique and interesting robots based on a combination of toys and mining machines, it also constructs an army to conquer the planets inhabits no matter the cost. What each of the three AI factories is not aware of is that each of them landed on the same planet and will be battling not only for the resources, but one another for dominance.

I found the book fascinating and well written. The author creates believable and likeable characters that are not super-human (toy). Each has its weakness and strengths based on the role is was assigned by the factory. Soldiers, snipers, brutes, etc. are all included in this mayhem of toy-based characters. The book is also more than just a battle between factories, it also involves deep friendships, complex situations, along with many other challenges one could face in this situation. What better could handle this pressure than a teddy bear with an M-16 rifle. It is a journey for survival and reconciliation. It is a story you will not quickly forget; in a good way.

John Hough did an exceptional job of bringing this book to life and as stated earlier, the narration was professional and without any recognizable audio artifacts heard such as swallowing, background noise, etc. As of this writing, he has not narrated many books on Audible, but I did enjoy his voice and pace of the book read.

The book is well worth your time, I spent my own Audible credit for this book, and I was not sorry I did.