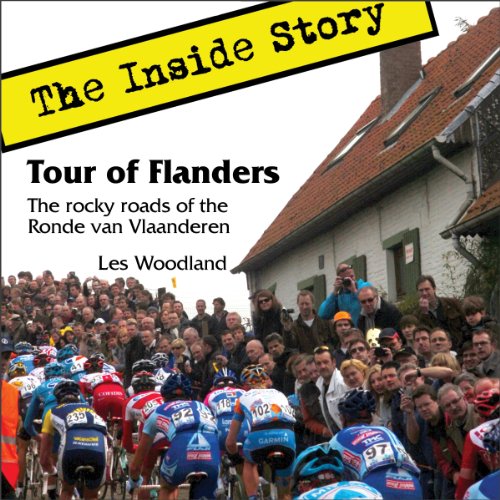 By: Les Woodland
Narrated by: Wyntner Woody
Try for $0.00

The Tour of Flanders is Belgium's most brutal day in the saddle. The bike-crazed Flemish don't just send riders over cobblestone roads. Nor are they content to break the racers' legs with nearly 20 steep hills. No, the worst of all cycling worlds meet in Flanders with narrow, vertical roads paved with slippery, dangerous cobbles. The hills are so steep they are called "muurs", or walls, and they come one after another, for hours, until the riders are shattered with exhaustion. The Tour of Flanders is so fiendishly difficult that the man who wins it earns everlasting fame.

Les Woodland tells the inside story of how the Flandrians became the world's most formidable racers, and of the dream of one writer to create a signature race, one that would showcase the Flemish virtues of toughness, endurance and determination. That dream became the Tour of Flanders, one of cycling's monuments. Come join Les for a fascinating ride in the cobbled hills of Flanders.

What listeners say about Tour of Flanders

What made the experience of listening to Tour of Flanders the most enjoyable?

Being an active Cyclist I enjoy cycling books which cover a lot of the history and facts behind classic races such as the Ronde. This book, in the same fashion as others by the same author, gives you a full history with lots of surrounding facts and information. However I found this book spoilt by the Narration, the narrator has a very odd fashion of enunciation, but his trying to mimic the accents of people's comments within the text make some sections almost inaudible.

Narration was terrible, the American accent really struggles with some simple English pronunciations and his attempts to mimic the accents of different people makes whole sections inaudible.

Change the narrator to one of a neutral accent and remove the attempts to try and replicate the accents of contributor's text. It is a book, not an comedy mimic tv show.

Shame about the accents!