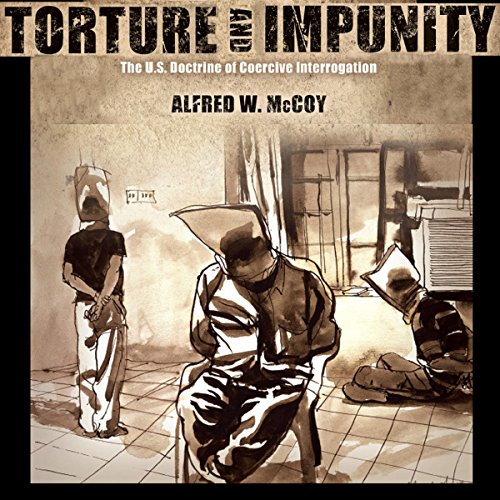 Torture and Impunity: The U.S. Doctrine of Coercive Interrogation

By: Alfred W. McCoy
Narrated by: David Halliburton
Try for $0.00

Many Americans have condemned the "enhanced interrogation" techniques used in the War on Terror as a transgression of human rights. But the United States has done almost nothing to prosecute past abuses or prevent future violations. Tracing this knotty contradiction from the 1950s to the present, historian Alfred W. McCoy probes the political and cultural dynamics that have made impunity for torture a bipartisan policy of the U.S. government.

During the Cold War, McCoy argues, the U.S. Central Intelligence Agency covertly funded psychological experiments designed to weaken a subject's resistance to interrogation. After the 9/11 terrorist attacks, the CIA revived these harsh methods, while U.S. media was flooded with seductive images that normalized torture for many Americans. Ten years later, the U.S. had failed to punish the perpetrators or the powerful who commanded them, and continued to exploit intelligence extracted under torture by surrogates from Somalia to Afghanistan. Although Washington has publicly distanced itself from torture, disturbing images from the prisons at Abu Ghraib and Guantanamo are seared into human memory, doing lasting damage to America's moral authority as a world leader.

The book is published by University of Wisconsin Press.

"A fascinating and disturbing book, providing the most authoritative account of torture yet available and conforming to the best traditions of scholarship." (Richard Falk, Princeton University)
"This book gives the truth, the whole truth, and nothing but the truth, about the use of torture by the United States intelligence service." (Jennifer Harbury, author of Truth, Torture, and the American Way)

What listeners say about Torture and Impunity: The U.S. Doctrine of Coercive Interrogation

As a starting point, this book is absolutely one-sided. I would have loved to have heard some counter-points and arguments as it progresses. That said, if 1% of the allegations set forth in the book are true then American policy is pointing us to be no better than another totalitarian state.

I thought the specific examples were very good, if chilling. I also thought the mostly chronological telling lent itself well.

It is a very depressing book and, while I did enjoy it and it was informative, I'm glad it's over. I withheld 5 stars overall because there was no counter-point to the arguments of the author and because the narrator seemed to have an unusual number of mis-pronunciations.

Found this book very interesting, as I have read a lot of the authors reference material. Have also learnt a lot from the book, as was quite shocked when I got to the torture practices of the Philippines about how the tortured victim was displayed. For those who have read up on the history of torture Project X, Project Phoenix and Project Artichoke as well as Cold War practises are discussed in detail. The narrator was very easy to listen to and read the book very well, although unfortunately but only one when rendition was mentioned the term 'extraordinary rendition' was used, that is a term given by the press not the CIA or Military