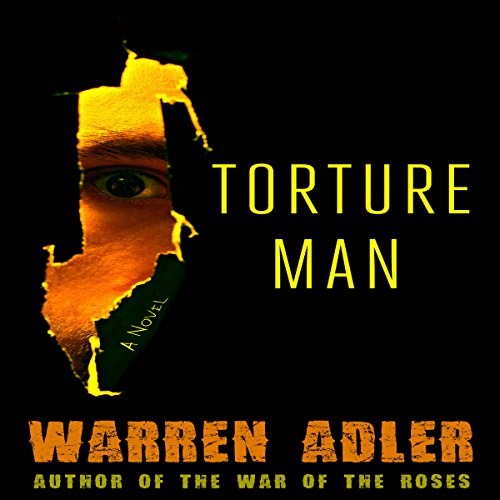 By: Warren Adler
Narrated by: Shawn Saavedra
Try for $0.00

Torture Man is currently in the works as a movie with award-winning Blacklist screenwriter Hernany Perla (Blink; Revelations).

The caller made it clear - $10 million or her daughter's head. The power of unintended consequences sends the privileged life of prominent anti-war activist Sarah Raab crashing down around her. Fear and terror take hold, and Sarah turns to former CIA operative Carl Helman, a man she has only just met and who stands against everything she has been fighting for.

How could this happen? Why would a terrorist group target her family? Confusion turns to fear and anger as Sarah faces the shocking truth lying beneath the surface of her life. And though Carl's interrogation methods violate everything Sarah believes in, they may be the only way to save her daughter's life.

Faced with horrific choices, Torture Man takes the listener on a torturous weekend where Wall Street kickbacks, deceit, corruption, and jihad collide on the Upper East Side of New York City.

What listeners say about Torture Man

There's a sense of predictability throughout Torture Man, but the narration saves the day. There is a distinct and contrasted cast of characters, and Shawn Saavedra does a tremendous job switching rapidly between them during tense dialogs. I rarely catch myself sitting in the driveway just to finish a chapter but I couldn't 'put this one down'. Finished in three days despite only an hour commute.

I'd highly recommend this audiobook, though I doubt I'd have enjoyed it nearly as much in print.

As suddenly as it picks-up, this story ends - tied with a khaki bow which contrasts with its more colorful contents.

The narration was fantastic!

I was immediately drawn into the story and did experience many edge-of-your-seat moments, as i enjoyed, with anticipation, where the author takes us. Overall I enjoyed listening to this book though there were some rather painful moments, necessary as they may have been, that affected my experience listening.

One's experience reading this book will vary drastically based on their political and/or moral views. Though I am all for sharing beliefs/convictions; sprinkled throughout the compelling narrative were random, forced sections of dialogue or exposition which felt like a lecture to the reader, borrowing from bad stereotypes and direct, overused arguments. Perhaps the points could have been made just as clearly - more knit into the narrative, workout interrupting.

"If they were grass no lawnmower would be big enough

Torture Man is a tense and powerful thriller which looks at different perspectives relating to something so major today in our lives: terrorism. Given that the synopsis reveals it, there is no need to be shy and not mention that the young daughter of a peace activist is kidnapped and a ransom demand made. Warned not to involve the police or the FBI, in desperation she turns to a stranger she met by chance, travelling with him by train to New York only a day or two previously, someone she instinctively disliked but the only person she thinks might be able to help in this situation, a CIA agent whose speciality is the extraction of information from prisoners. The torture man.

The kidnap story itself is suspenseful, frightening and worthy in itself. But far more is laid out here: conflict of ideologies, ties of loyalty, cultural and societal beliefs and morality itself. How true can we stay to our ideals when they stand in the way of other commitments? This is a book to make the listener think, not to spoon-feed solutions, as different viewpoints are voiced and experienced by the protagonists. And, as always with Mr.Adler's work, it is brought to life and held together by his excellent characterisations.

As narrator, Shawn Saevedra reads with clarity and his pacing is good, the delivery calm. The character voicings are not overly differentiated but sufficiently so for them not to be muddled. His pleasant presentation helps to carry this difficult subject through to it's conclusion, gently soothing the reader.

I have listened to a number of Mr.Adler's books and, whilst I would not consider this to be one of his most enjoyable, it is certainly well worth reading, sensitively opening up a debate on areas which are so often held firmly and sincerely but without too much thought beyond gut reaction. And all within the workings of a worthwhile thriller. Recommended.

This is a fast-paced thriller with a complex and fascinating lead character . But, the author didn’t limit his creative attention to only Carl. All of the secondary characters are well-developed with traits and quirks that make them interesting people, any one of which could have emerged as a main character as the plot moved forward. These character details are revealed with no slowing of the pace, and this richness supports masterful and believable dialog that keeps the burners on high.

I haven't listened to him before. He did a good job with various voices.

I was surprised in how engrossed I became in the story. I would recommend this book to my friends. I received this audiobook for free through Audiobook Boom for my unbiased review.

Makes You Think About Your Own Beliefs

I loved that this book really challenged me to think about my own beliefs, assumptions, and feelings. It's easy to say how you would handle something before you're actually in the situation. This really made me think about how different perspectives and experiences shape us.

The narrator, Shawn Saavedra, was great. His characterization of the main character and accents were wonderful, but what he did best was how he portrayed the various emotions and emotional/behavioral changes of the characters.

This audiobook was provided by the author, narrator, or publisher at no cost in exchange for an unbiased review courtesy of AudiobookBoom.

Easy to Judge until its TOO CLOSE TO HOME!

I ABSOLUTELY LOVED THIS AUDIO BOOK AND ITS STORYLINE. I believe it is perfect for everything that is going on in America today. I find it AMAZING how people can complain about soldiers, police, etc. until they need them or find themselves in the situation having to make similar choices. The author was perfect for this book and its characters. I don't usually listen to audio books more than once all the way through but I liked this one so much I think I just might. I highly recommended this book.

This audiobook was provided by the author, narrator, or publisher at no cost in exchange for an unbiased review. Thank you Audiobook Boom.

What made the experience of listening to Torture Man the most enjoyable?

The performance by Shawn Saavedra was excellent. The story was a nice blend of the implications of morality balanced against practicality. Thought provoking while providing a pulse-quickening storyline.

Classic tug-of-war between morality and practicality.

What does Shawn Saavedra bring to the story that you wouldn’t experience if you just read the book?

Never ask for a favor without knowing the consequences.

This audiobook was given by the author, narrator, or publisher at no cost in exchange for an unbiased review via Audiobook Boom”

Torture Man was a fun read. Fast paced, good characters, and a hot button topic handled in a way that can make you rethink the issue or torture.

It was interesting seeing characters really struggle with their beliefs on such a strong topic, and watching them deal with their choices and consequences.

I have heard this narrator before, and I think this may be his best work yet. Great voices and delivery. An excellent choice for this book.

Warren Adler is top notch when it comes to suspense. If you like this one try We Are Holding the President Hostage, one of his other books. This was pretty gritty and intense. Not exactly an original story but still quite enjoyable.

The narrator did a good job and was perfect for this book.