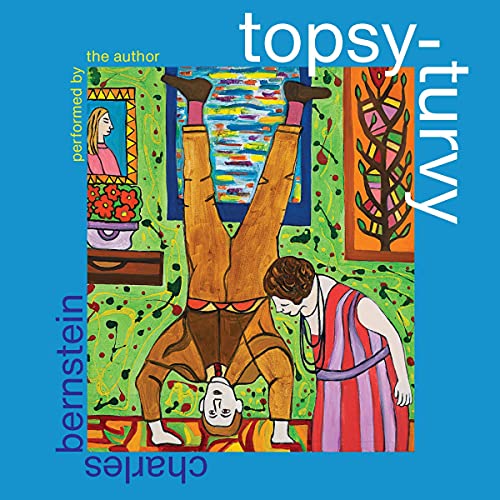 This audio version of acclaimed poet Charles Bernstein's most expansive and unruly collection to date is read in inimitable fashion by the author. It features poems, both tiny and grand, that speak to a world turned upside down. Our time of “covidity”, as Bernstein calls it in one of the book’s most poignantly disarming works, is characterized in equal measure by the turbulence of both the body politic and the individual. Likewise, in Topsy-Turvy, novel and traditional forms jostle against one another: horoscopes, shanties, and elegies rub up against gags, pastorals, and feints; translations, songs, screenplays, and slapstick tangle deftly with commentaries, conundrums, psalms, and prayers.

Though Bernstein’s poems play with form, they incorporate a melancholy, even tragic, sensibility. This “cognitive dissidence”, as Bernstein calls it, is reflected in a lyrically explosive mix of pathos, comedy, and wit, though the listener is kept guessing which is which at almost every turn. Topsy-Turvy includes an ode to the New York City subway and a memorial for Harpers Ferry hero Shields Green, along with collaborations with artists Amy Sillman and Richard Tuttle. This collection is also full of other voices: Pessoa, Geeshie Wiley, Friedrich Rückert, and Rimbaud; Carlos Drummond, Virgil, and Brian Ferneyhough; and even Caudio Amberian, an imaginary first-century aphorist.

Bernstein didn’t set out to write a book about the pandemic, but these poems, performances, and translations are oddly prescient, marking a path through dark times with a politically engaged form of aesthetic resistance: We must “Continue / on, as / before, as / after.”

The audio version of Topsy-Turvy is performed by the author.

“As poet, editor, critic, translator, and educator, Bernstein’s decades-long commitment to the community of arts and letters reflects a profound understanding of the importance of language in the business of culture-making. Throughout his career Bernstein has facilitated a vibrant dialogue between lyric and anti-lyric tendencies in the poetic traditions we have inherited; in so doing, he has shaped and questioned, defined and dismantled ideas and assumptions in order to reveal poetry’s widest and most profound capabilities.” (Ange Mlinko, Claudia Rankine, and Evie Shockley, Bollingen Prize Committee)

"Not set out to be a book about the pandemic, this rowdy collection of poems, performances and translations nevertheless speaks volumes about the upside-down world we have all found ourselves living in." (The Bookseller)

“Bernstein is less the furloughed bohemian imagining that he is writing only for himself - not marooned, disowned, or marginalized. Instead, he is employed, populated, by poetry. He is well-read and plugged in. . . . [His] poetry is indeed topsy-turvy. Is he playing a game with our emotions? That is for the reader to decide.” (Jeremy Sigler, Tablet)

What listeners say about Topsy-Turvy