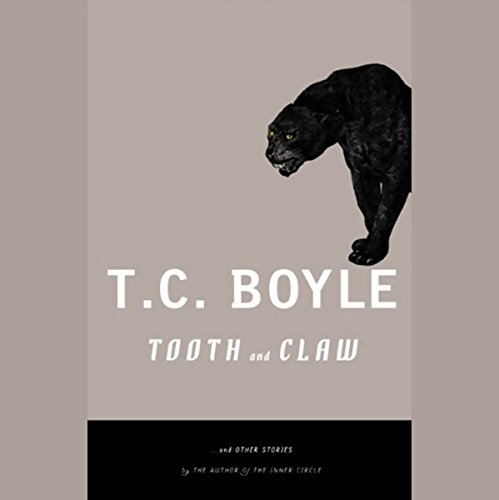 Since Descent of Man appeared in 1979, T.C. Boyle has transformed the nature of short fiction in our time; in a review of his most recent collection, After the Plague, The New York Times hailed him as "a writer who can take you anywhere". Which is exactly what Boyle does in Tooth and Claw.

These 14 stories, which have appeared in The New Yorker, GQ, Harper's, McSweeney's, and Playboy, display Boyle's imaginative muscle, emotional sensitivity, and astonishing range. Here you will find the whimsical tales for which Boyle is famous, including "The Kind Assassin", about a radio shock jock who sets the world record for most continuous hours without sleep. Readers will love the comedic drama of the title story, about a man who must contend with a vicious cat from Africa that he has won in a bet. And who could resist the gripping power of "Dogology", about a woman who becomes so obsessed with man's best friend that she begins to lose her own identity to a pack of strays. Boyle here proves once again that he is "a writer who can take any topic and spin a yarn too good to put down" (Men's Journal).

"The wired rhythm of Boyle's prose and the enormity of his imagination make this collection irresistible; with it he continues to shore up his place as one of the most distinctive, funniest, and finest, writers around." (Publishers Weekly)
"Boyle's imagination is protean, and his prose transporting....Boyle's visions of our perverse attempts to defy and deny nature are darkly humorous and wisely trenchant, brilliantly highlighting our unlikely, yet, so far, effective survival instincts: hubris and obliviousness." (Booklist)

What listeners say about Tooth and Claw

TC Boyle is an amazing wordsmith, and I've always found his short stories to be full of vivid description, and if the point and plot are not always clear, the journey to the story's end is always enjoyable. This audiobook is read by the author, whose tone matches very well the world-weary, self-absorbed view of many of these stories' narrators. Sometimes, however, my mind wandered while listening, and at times I wished I was reading this instead of listening to it, so I could go back and listen again to what I missed (hard to do with an ipod!) By far the best story, in my opinion, is "Chicxulub", although there are several other memorable stories. At the end of this audiobook is a fascinating interview with the author, in which he talks about his process of writing -- a neat "extra".