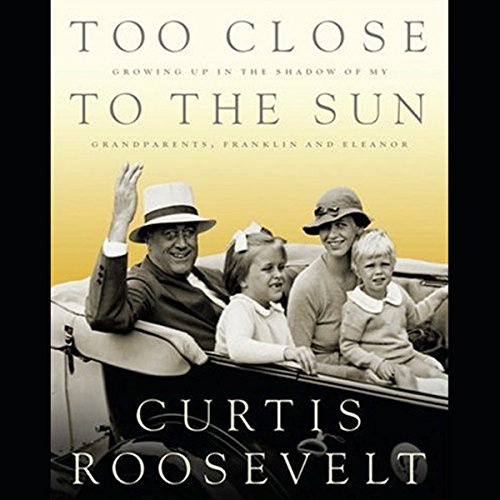 Too Close to the Sun

By: Curtis Roosevelt
Narrated by: Jeremy Gage
Try for $0.00

Curtis Roosevelt was three when he and his sister, Eleanor, arrived at the White House soon after their grandfathers inauguration. The countrys First Grandchildren, a pint-sized double act, they were known to the media as Sistie and Buzzie.

In this rich memoir, Roosevelt brings us into the goldfish bowl, as his family called it - that glare of public scrutiny to which all presidential households must submit. He recounts his misadventures as a hapless kid in an unforgivably formal setting and describes his role as a tiny planet circling the dual suns of Franklin and Eleanor Roosevelt.

Blending self-abasement, humor, awe and affection, Too Close to the Sun is an intimate portrait of two of the most influential and inspirational figures in modern American history and a thoughtful exploration of the emotional impact of growing up in their irresistible aura.

"Too Close to the Sun leaves the reader in no doubt that The First Grandchildren's grandparents were good as well as great. It is reassuring to know that the two conditions are not incompatible." (The Times)
©2008 Curtis Roosevelt (P)2009 Audible, Inc.

What listeners say about Too Close to the Sun

Really enjoyable look into the lives of FDR, Eleanor and the White House, all from the perspective of a very little boy!

The reader Jeremy Gage is crisp, easy on the ears and makes this audiobook a joy to listen to!

Five stars all the way!

This book comes across as a sincere expression of what it was like to live in the White House as a little boy, and what it was like to be a Roosevelt. It is honest without being complaining and it doesn't gloss over flaws that you might like to know about.

I enjoyed hearing this book and learning about FDR from a family point of view.