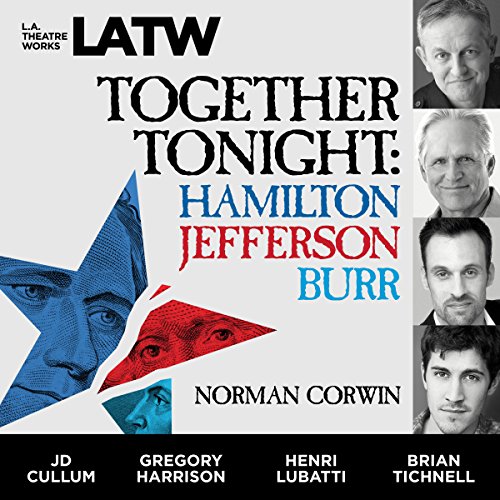 Three prominent Americans debate the merits of unchecked immigration, national security, and civil rights. While it sounds like a contemporary, made-for-TV event, this confrontation takes place in 1799, with three of America's Founding Fathers as participants: Alexander Hamilton, Thomas Jefferson, and Aaron Burr. Legendary radio dramatist Norman Corwin created this imagined discussion from the participants' actual writings - proving that when it comes to politics, some things never change.


Recorded in Los Angeles before a live audience at The James Bridges Theater, UCLA in October of 2016.
©2016 Norman Corwin (P)2016 L.A. Theatre Works

What listeners say about Together Tonight

This play is wonderful, If you have not listened to Norman Corwin you should he is one of the finest writters in the history of radio. you can trust that he is factual and not making things up for a political purposes. The Rivalry about the Lincoln Douglas debates is one of the best plays I have ever listened to, so give this one a try you will not be sorry.