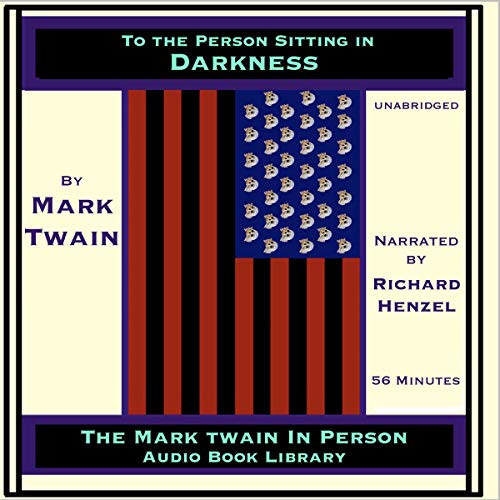 To the Person Sitting in Darkness

Mark Twain, incensed by increasing religious and political imperialism around the globe, characterizes a large nation's invasion and occupation of a smaller country as the "strange and over-showy onslaught of an elephant upon a nest of field mice, on the pretext that the mice had squeaked an insolence at him conduct which 'no self-respecting government could allow to pass unavenged' as Mr. Chamberlain said. Was that a good pretext in a small case when it had not been a good pretext in a large one?- for only recently Russia had affronted the elephant three times and survived alive and unsmitten."

What listeners say about To the Person Sitting in Darkness

The “person sitting in darkness” in Twain’s blistering essay is one of those poor, benighted souls in Africa and Asia who haven’t experienced the blessings of European civilization. And in case there’s any question about it, Twain’s use of the phrase is dripping with irony. His real targets are those proponents of Western Civilization who are forcing their values on those people at the point of a gunboat.

He is especially critical of the retribution visited on these countries when missionaries are killed. The countries are forced to pay millions of dollars in compensation for each missionary, and sometimes are forced to return an equal number of heads.

But then he gets around to the real target of his wrath: the American campaign to conquer the Philippines. Twain was an anti-imperialist of the first water, and he expressed revulsion at the dishonest game America was playing in the Pacific. We had given military aid to the Filipinos fighting for independence from Spain; and then, that independence having been won, we left our army in place and deceitfully provoked our own war. Overnight the term “rebel” changed from a compliment to the worst of accusations. We massacred the very armies we had been supporting up to that point. Twain’s outrage is apparent, even though it’s been seasoned with dark humor.

Richard Henzel is a first-class narrator of Twain. He’s produced readings of the familiar titles, but he’s also expended considerable effort to record lesser-known works like this one. It’s short, but it’s an absorbing and rewarding listen.