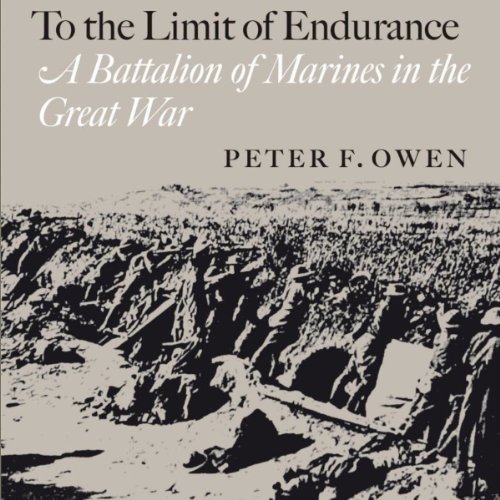 To the Limit of Endurance

Scholars and historians offer several theories for the crippling losses suffered by the American Expeditionary Forces on the battlefields of World War I: inexperience, poor leadership, hasty expansion of duties, and others. But until now, most of these studies have focused at the division level or higher. Now, with To the Limit of Endurance, Peter F. Owen offers a tautly worded, historically rigorous, and intensely human survey of the agonizing burden shouldered by the Second Battalion of the Sixth Regiment of U.S. Marines from its formation in Quantico, Virginia, in 1917 until the cessation of hostilities in November of the following year.

In places like Belleau Wood and Soissons, these young men, led by dedicated officers, died in staggering numbers - primarily because of the outmoded tactics they had learned. Owen shows how the battalion regrouped after these campaigns, however, and embarked on a period of intense retraining. By the time of the closing weeks of the war, the adjustments they had made allowed them to mold themselves into a coldly efficient military machine.

Drawing on a treasure trove of surviving first-hand accounts, Owen expertly combines these individual observations with military records and archival sources to create a mosaic that provides not only a case study of how one organization grappled with transformation but also a tightly focused, ground-level view of the lives - and deaths - of these courageous American military men. The grueling, ultimately triumphant odyssey of the 2nd Battalion, 6th Marines will appeal to military historians, professional soldiers, and interested general listeners.

"This is one of the most useful "soldier's eye" stories published during the last few years." ( Journal of Military History)
“Owen makes superb use of an impressive array of personal accounts from officers and enlisted men and elucidates many interesting features about the experiences of American infantry units in the First World War.” (Mark E. Grotelueschen, USAF Academy)

What listeners say about To the Limit of Endurance

More for the military historian but interesting to see how little the US actually did in 1918. But how important it was for the US to add a somewhat naive esprit d’corp to the demoralized allies. You can almost feel how six or seven months at the front was so exhausting. The allies had been at it for four years.

Get a hard copy - the Audible narration is appalling. Imagine Marty Stauffer from "Wild America" describing burrowing techniques of woodchucks, or Mr. Rogers telling a children's tale. Completely wrong for the telling of a monumental battle story.

Would you be willing to try another one of Richard Wayne Stageman’s performances?