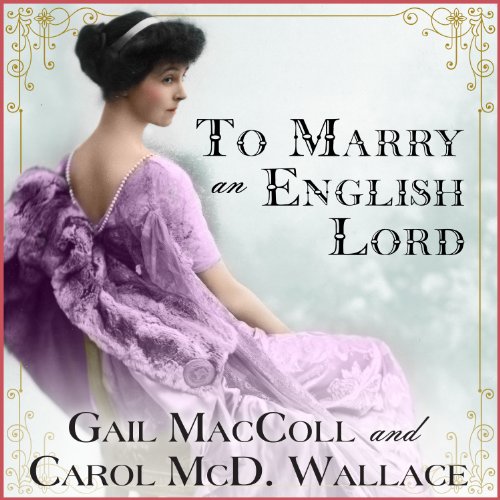 To Marry an English Lord

From the Gilded Age until 1914, more than 100 American heiresses invaded Britannia and swapped dollars for titles - just like Cora Crawley, Countess of Grantham, the first of the Downton Abbey characters Julian Fellowes was inspired to create after reading To Marry An English Lord. Filled with vivid personalities, gossipy anecdotes, grand houses, and a wealth of period details-plus quotes and the finer points of Victorian and Edwardian etiquette - To Marry An English Lord is social history at its liveliest and most accessible.

"In your very flattering article about books that might please fans of Downton Abbey, I was sorry that one title was missing: To Marry an English Lord.... It is a marvelous and entertaining study." (Julian Fellowes, writer and creator of Downton Abbey)

What listeners say about To Marry an English Lord

Not Great on Audio

The organization of the book did not fit well with audio. I can see why the author would have made the lists of people, estates, etc., but they don't work very well here. They interrupt the flow of the text because the narrator reads "the box" that has the extra information. I listened to about half the book, but then I gave up.

The narrator was excellent! She pronounced everything superbly and brought the authors' wonderful words to life. I find 19th century "society" fascinating and this book did not disappoint. Bravo!

The storyline was extremely interesting but you need to fast forward through the endless list of names, this added no value to the story.

If you could sum up To Marry an English Lord in three words, what would they be?

Would you be willing to try another book from Gail MacColl and Carol McD. Wallace ? Why or why not?

Sure. As a long time reader of historical fiction, this book gives a lot of information about the time period I enjoy reading about.

Have you listened to any of Kate Reading’s other performances before? How does this one compare?

Kate Reading gives an excellent performance in this audio book.

No, it was just a pleasant, informative read.

This narrator was absolutely horrendous. It sounded like a bad robot recording. While I was really looking forward to this book, I couldn’t even get through the first chapter before giving up. The voice ruined the book. I will consider purchasing the book in paperback or perhaps seeing if it’s at the local library, but please save your credit on this audible version.

a fun listen...if you ignore or skip the lists

a fun listen...if you ignore or skip the lists.

If you love the British TV show, Downtown Abbey, you'll love this book. It is the true tales of rich American girls in search of a nobleman. And noblemen in search of money to save their ancestral homes and the lifestyle someone of their rank was entitled to.

If you like learning about the wealth and excess of the English upper class and American buccaneers who went to England to marry for a title, you'll love this book. I ate up every bit of it and highly recommend it.

Perhaps its true, money does not equal happiness

This is an interesting list of facts about young wealthy young American women who traded their wealth for social status and a British title. Later the young men who owned those titles but whose estates no longer supported them came to America hoping to meet these young women. But it is just a list of who did what when and superficially why.