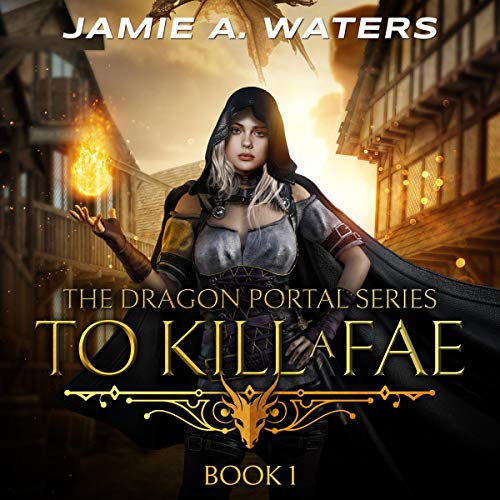 To Kill a Fae

By: Jamie A. Waters
Narrated by: Nicole Blessing
Try for $0.00

Marked for death, Sabine escaped from her home more than ten years ago.

But the Wild Hunt will never give up.

It should have been easy to stay hidden. All Sabine had to do was keep her head down, avoid telling anyone about her past, and above all else - not let her glamour drop.

When a charismatic stranger arrives in the city, Sabine finds herself unwittingly drawn to the power she can sense hidden within him. Keeping her distance is nearly impossible, especially after a life debt is called due and she’s tasked into helping steal a rare artifact.

Sabine is the only one who can break the magical barriers protecting the item, but that means revealing the truth about her identity and exposing her darkest secrets.

Unfortunately, the Fae aren’t the only ones hunting her.

And the most dangerous monsters aren’t always confined to the dark.

What listeners say about To Kill a Fae

Too Kill a Fae

really enjoyed this book, To Kill A Fae is a wonderfully read. Please read this and others by this author

I recommend reading this on kindle instead, the narrator is a very odd choice for this book.

I’d like to give this more stars but unfortunately the narration was unbearable.

Entertaining story but not the best narrator

I wasn’t going to pick up this audiobook. The cover, although pretty, gave the impression of a cookie cutter storyline. I was pleasantly surprised. I really enjoyed the characters and their interactions. The building block of a paranormal romance is definitely there but somehow it is not a deterrent. One thing that could be better is the narrator. It felt like every sentence ended with “!”, the way she read the story which made it sound juvenile. I am good with the narrator voice but her style needs some improvement.

Fantasy at it's Finest

Awesome beginning to what looks like an amazing series. I am really looking forward to more adventures with these fabulous characters!

I've read other books by author Jamie A. Waters, and have thoroughly enjoyed them. This seems to be a bit different from the Omni Towers series, but from the very beginning I was hooked. Whew! So much intrigue and excitement starting with the first few lines. I absolutely loved the vast assortment of characters, especially Sabine with her kick-ass attitude, but with a soft side as well. No one... I mean NO ONE messes with Sabine and gets away with it. Add in the handsome and charismatic captain of a smuggler's ship, with secrets of his own, and you have a dynamic duo that you seriously hope will get together. So much chemistry! There are demons, witches, pixie's, a goblin and more. All have very unique characteristics set in a world that only Ms. Waters could have created. It was like watching a movie playing in my head as I listened! At times, I was sitting on the edge of my seat and cringing and at other times I was smiling and out-right laughing.

Who is trying to have Sabine killed? And what is her connection to Dax and Bane, the two demon brothers? As much as I want to, I can't give away any spoilers.

This could almost be read as a stand-alone, but I'm so glad to hear that there is more to come in the Dragon Portal series!