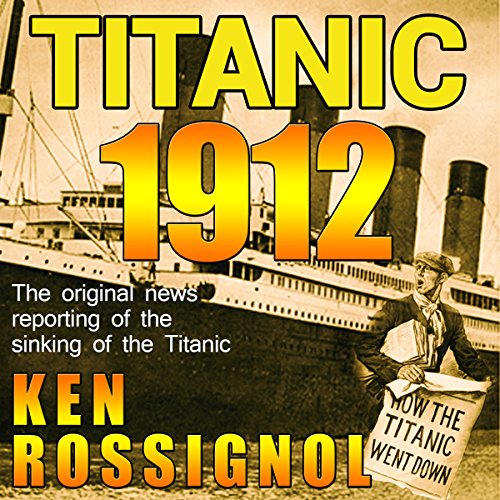 Titanic 1912: The Original News Reporting of the Sinking of the Titanic

By: Ken Rossignol
Narrated by: Barry Abrams
Try for $0.00

The original 1912 news accounts of the Titanic disaster include the first-hand accounts of survivors as told to reporters who met the ship bringing them from where they were saved from lifeboats. The surviving crew describes the crucial moments after the ship hit the iceberg. A crewman testifies just three days after the sinking that the ship had a fire in its coal bunkers from the time it set sail.

What listeners say about Titanic 1912: The Original News Reporting of the Sinking of the Titanic

A very interesting perspective on the Titanic.

Where does Titanic 1912: The Original News Reporting of the Sinking of the Titanic rank among all the audiobooks you’ve listened to so far?

This is one of the best because it presents great, new information about a topic that I have always been interested in.

A lot of the characters in the whole Titanic story are quite familiar and it is hard to pick a favourite but it was great to learn more details about them.

Some of the stories had very emotional parts that really touched a person and only by reading the original stories do you get that close to the actual story.

This is such an interesting perspective on the Titanic story that I have never come across before.

Iceberg did not jump out and attack theTitanic

What made the experience of listening to Titanic 1912: The Original News Reporting of the Sinking of the Titanic the most enjoyable?

Barry Abram's expression as he told the story

What was one of the most memorable moments of Titanic 1912: The Original News Reporting of the Sinking of the Titanic?

I found the fake news reports the most memorable

Again, his expression as he told the story

The iceberg did not jump out and attack the Titanic!!!

As I was rereading Titanic 1912, my husband had the news channel on TV. I irony was not lost on me as I read about the ‘misunderstandings’ in the initial news coverage. Or the errors mixed with the conjured and fabricated news stories. Some things never change! Even armchair quarterbacks still believe the notion that somehow the rich were favored for escaping the sinking ship while the lower classes died. They must have seen the movie instead of reading the lists of those who went down with the ship. As usual, Ken Rossignol went to original sources to garner information for this book. Thank goodness he took H.L. Mencken’s advice that a cynic is a man who, when he smells flowers, looks around for a coffin. Ken looks around and carefully checks out all of the ‘coffins’ he finds. There is a lot of information in this book and I highly recommend it for those whose minds aren’t already made up. The iceberg did not jump out and attack the Titanic!!!

New and Interesting Details of the Titanic

This was an Audiobook that really brings the amount of misinformation and out and out fraudulent articles that occurred in the titanic news coverage.

The narration kept the reporting of these facts interesting and enjoyable. The reports were so varied that the people on shore waiting for their family members were put through the wringer in emotion. The news that there were no deaths and all were rescued was especially cruel knowing now that so many perished.

There have been rumors of cover ups and even people paid to earn a place on the lifeboats. The crew and the passengers were all unequipped for a disaster of this magnitude. The sinking of Titanic caused changes in several different safety regulations. The news media took a terrible accident and created even more sensation. The eyewitness reports were as expected differing and varied, but each were reported with sensationalism that did nothing to help those that had been left widowed or orphaned.

A great book and an even better audiobook. Ken Rossignol has brought an event that happened over one hundred years ago new life. Comparing the different wrecks of the time as well as current ship disasters really allows you to see the similarities in the reporting of these events. If you have an interest in the Titanic then this is not to be missed.

While the subject of this book was of interest to me, I received very little enjoyment listening to it as it was riddled with repeated phrases. It made me wonder whether there might also be skipped phrases or sections. it also begs the question as to whether there are issues with the book itself. I would not recommend getting this version, wait until someone proof reads/listens to it.