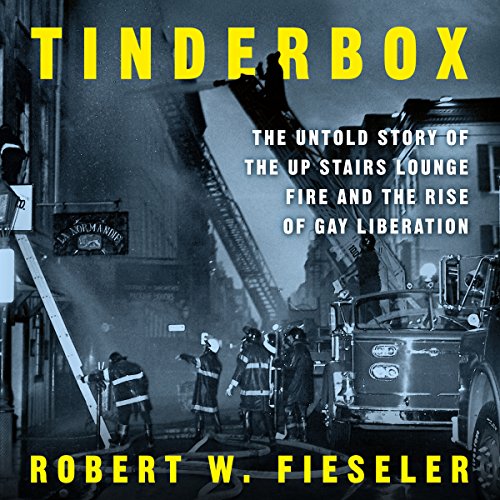 By: Robert W. Fieseler
Narrated by: Paul Heitsch
Try for $0.00

Buried for decades, the Up Stairs Lounge tragedy has only recently emerged as a catalyzing event of the gay liberation movement. In revelatory detail, Robert W. Fieseler chronicles the tragic event that claimed the lives of 31 men and one woman on June 24, 1973, at a New Orleans bar, the largest mass murder of gays until 2016.

Relying on unprecedented access to survivors and archives, Fieseler creates an indelible portrait of a closeted, blue-collar gay world that flourished before an arsonist ignited an inferno that destroyed an entire community. The aftermath was no less traumatic - families ashamed to claim loved ones, the Catholic Church refusing proper burial rights, the city impervious to the survivors' needs - revealing a world of toxic prejudice that thrived well past Stonewall. Yet the impassioned activism that followed proved essential to the emergence of a fledgling gay movement. Tinderbox restores honor to a forgotten generation of civil-rights martyrs.

What listeners say about Tinderbox

This book was heartbreaking and infuriating at the same time. My heart goes out to all those who lost loved ones on that night in June 1973. I am also appalled that this is not more widely known about. I listened to this entire book in two sittings. I could not stop listening. The writing is excellent, and the narrator is phenomenal. You can hear the anger and disgust in his voice at points in the story, as well as sounding on the verge of tears in others (as I was at many points in the story). I highly recommend this book to everyone!

This book is very thoroughly researched and very well written. The reader does and incredible job creating shock, outrage, and pathos.

Robert did an amazing job with this book! I learned about it from the podcast Beyond Bourbon Street and had to hear it myself! Having been born and raised in the 90s, I had never heard of the Upstairs Lounge. This book brought to light major issues in the way the case was handled and is still handled today. The legality of how it was handled was brought to light and shows you what needs to be done to prevent something of this magnitude from happening again!

I am a New Orleanian, born, and reared in the city. I picked this book because I wanted to learn more about the Upstairs Lounge fire. I thought the book was very well done and I learned a lot. My issue is the person picked for the narration, Mr. Heitsch. He consistently mispronounces all of the local names. I know that we have interesting pronunciations ourselves, but I really would have liked my audible experience more if he had attempted to get a few of the names correct. His New Orleeens, Fay Doo Doo, Jim-man-ee Lounge, and the like were painful to listen to. I guess no one participating in or overseeing this project was actually from New Orleans.

Paul Heitsh has obviously never been to New Orleans and did no research for this production. He mispronounced proper names, businesses and locations throughout the book.

Warning: Do not read Chapter 4 in public. I had the unpleasant experience of telling numerous Starbucks patrons that my sobs, tears, and tissues were not the result of personal troubles, but piercing heartbreak brought on by an excellent narrator. I give Paul Heitsch the greatest respect for orating Fieseler’s tale with such feeling—there were several moments when I had to wonder if he, like me, had to put the text aside to compose himself. This is an excellent title for those studying LGBTQ history or Gay Liberation, or even true crime junkies. 10/10 would absolutely recommend.

This important account of an ignored/buried hate-crime fills a critical gap in LGBTQ & civil-rights history. My big peeve is that the narrator has a ridiculously monotone voice which could almost lull one to sleep despite the captivating story.
~Dr. Chris P. Hafner, PhD, MPH, ND