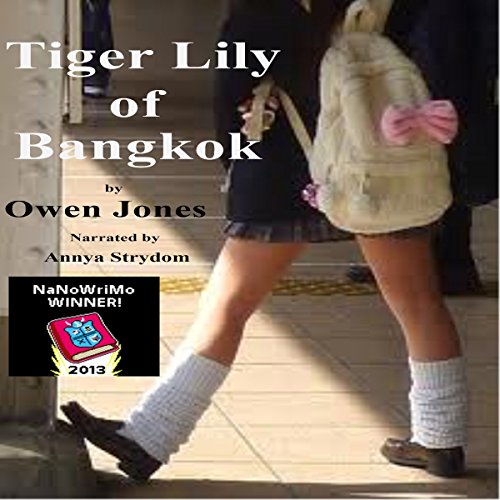 By: Owen Jones
Narrated by: Annya Strydom
Try for $0.00

Lily was a happy little girl, which lasted until an 'uncle' started to abuse her from the age of eleven. She became shy and introverted, leading a lonely life until she moved to Bangkok to study at university.

However, her thoughts and her past would not leave her alone, so, after classes, she began to seek out men she suspected of paedophilia and exact her own peculiar type of revenge on them.

She became the vengeful Tiger Lily of Bangkok and terrified society, but how long could she keep evading the police, and did she secretly want to get caught anyway so she could make her story public?

What listeners say about Tiger Lily of Bangkok

This is a great story - but the Narrator is so hard to listen to! Well written story about a young Girl getting revenge on guys who take advantage of young girls. Kept me wanting to know what’s next. If I hadn’t heard a couple of Owens books before I would have not listened in. Please don’t use this narrator again 😊.

I was given this free review copy audio-book at my request and have voluntarily left this review. This review is for the audio copy of Tiger Lily of Bangkok: When the Seeds of Revenge Blossom! by Owen Jones and narrated by Annya Strydom. I didn’t know what to expect when starting this book. Next thing I know I am swept up in the story of this girl’s life. The narration was perfect for the story.

This was a very interesting listen, and as someone who likes comics reminds me a bit of Hit Girl though she didn't have the same dark past. I look forward to further books in the series. The narration was occasionally difficult to listen to though. The accent fits the story but does make it harder to listen for me. I received a copy of this book at my request in exchange for a fair review.

The narration was so poor I could not listen for more than a few minutes. Therefore I cant truly rate the story. Don't waist your money.