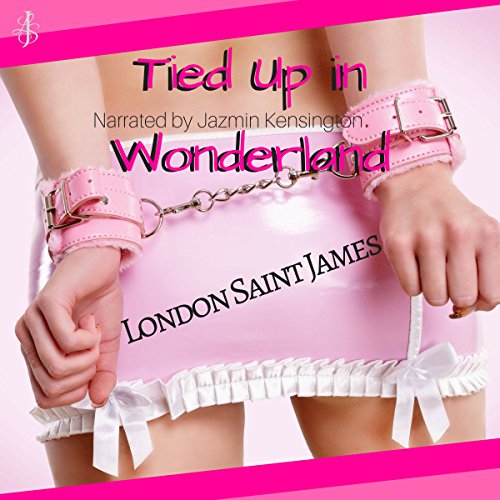 Tied Up in Wonderland

By: London Saint James
Narrated by: Jazmin Kensington
Try for $0.00

Once upon a time there was a snoopy reporter, one Master Dom who wanted her for his own, and an underground bondage club that could mean the story of the year.

When Allison McCray decided to go undercover and pose as a submissive college girl named Alice Smith, she may have found herself in over her head. Especially when she becomes the new pet of someone they call Master Hatter.

Having Alice in his club may have been what Master Hatter always dreamed of, only he wished she were there as the woman he knew as Allison, not Alice. No matter. He'd play any game she wanted, and perhaps somewhere along the way he would show his "little Alice" what she'd been missing, one well-placed swat at a time.

But does Alice truly have what it takes to be a submissive, find the answers she seeks, learn the identity of the Master, and break the story that could make Allison McCray a household name? Or will she forever be tied up in Wonderland?

What listeners say about Tied Up in Wonderland

There is enough story here to hold you attention when they are not getting busy. The Alice in Wonderland reference is very loose. But I am not mad about that. I appreciate the author took this in her own direction and did not rely on the gimmick.

I really like Allison and her brash attitude. She is a gal who knows what she wants! Definitely the kind of heroine I prefer. And she is not ashamed of her sexuality!! You go girl!

The mystery of Master Hatter was fun to see play out, there are several candidates along the way! The other angle on the story were the missing girls, I do wish there were more build there.

I listened to the audiobook narrated by Jazmin Kensington, who was delightful. I enjoyed the way she let the voices flow and the energy of the scenes came through. She has a delicious rasp to her voice that fits the men and women alike. It was a great listen from beginning to the end. She is a new narrator for me, but you can bet I will be looking for more of her reads!

I have had this ebook on my computer for some time, shame on me for not reading it sooner. Happily, it came out in audio, which I have more time to listen/read.

*** If you found this review at all helpful, please take a moment to let me know. I love reading and sharing my opinions with other readers. I listen at double speed, all my impressions of the narration are from that setting. Thanks for taking the time to read my review! You can see more audiobook reviews on my blog Eargasms Audiobook Reviews ***

A little light on bondage, but well worth a listen

I really liked the story, though it was light on bondage. The idea a reporter wisits a bondage club is great, but would have been perfect if she had been a little reluctant about it. But that's just me i guess.
well worth a listen, even if it aint perfect.

The stories were cute and sexy. Jazmin is always one of the best narrators available. Keep up the good work.
Natalie

There are some interesting predicaments along Alice’s path to Wonderland, a mystery, and a couple of sexy men weaved in, but only one is the allusive Master Hatter. You’ll have to listen to find out who the Master is.

Job well done to both the author and the narrator.