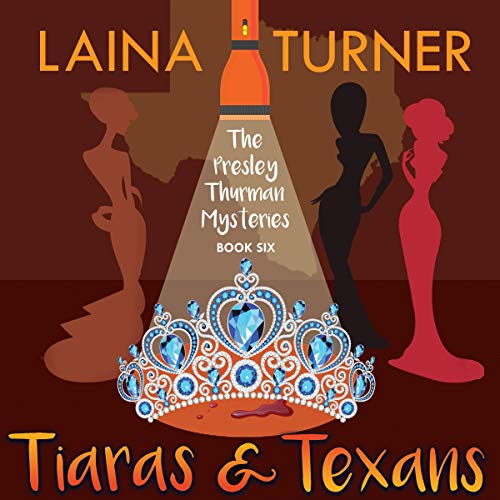 Presley wins a bet and thinks she finally is going to get a chance to work with Cooper and show her she's got the potential to be a good security detail for his company. She is miffed when she finds out her first assignment is to protect a bunch of self absorbed beauty queens at a Texas pageant. It soon becomes a more interesting gig than she thought, much to her delight and Cooper's dismay, when one of the beauty queens turns up dead and the fierce competition leave the door wide open to suspects.

Would you consider the audio edition of Tiaras & Texans to be better than the print version?

I haven’t read the print version of Tiaras and Texans but I definitely enjoyed the audiobook version. The narration is fabulous and the story is fun.

What other book might you compare Tiaras & Texans to and why?

I don’t really like comparing books I will say that this is a great cozy mystery, which is a subgenre of crime fiction where the sex and violence are downplayed or even portrayed humorously. (Thanks Wikipedia!)

Which character – as performed by Lee Ann Howlett – was your favorite?

One of the things I enjoyed the most of Lee Ann Howlett’s performance while listening to this audio book was the depiction of the pageant contestants each one was unique which is fantastic when you are listening to an audiobook. The best part is the accent that each one of her characters had, a lot of the time people try too hard for Texas accent and end up sounding awful and since I am a native Texan I can definitely attest to the magnificent job of Lee Ann Howlett.

There isn’t a singular part in the book that moved me the fun of a cozy mystery is the mix of mystery with the light heartedness of a contemporary romance, which this one definitely had.


Presley wins a bet against her boyfriend allowing her to finally work for his security company. Though she starts the assignment especially excited knowing she will be good at this job she ends up annoyed when she finds out that the job in question is to protect beauty queens at a Texas pageant. Soon after beginning the job she and Cooper, her boyfriend and now boss, find that this will be more than just protecting the girls against childish pranks now they will have to find out who murdered one of the girls before it happens again.

I absolutely loved Lee Ann Howlett’s narration of this book. First off her characters where each distinct from the low timber of cooper to the high pitched whine of some of the beauty pageant contestants making the story come to life. What really made this an excellent performance though weren’t just the different voices of her characters but also the accents. I am a native Texan and so many times I come across audio books or even on television where an actor or narrator will butcher the accent but Lee Ann Howlett was spot on, I didn’t even cringe once. The story itself is a great cozy mystery, which is a subgenre of crime fiction where the sex and violence are downplayed or even portrayed humorously. (Thanks Wikipedia!) Laina Turner did a wonderful job with the mystery aspect of the book not once did I suspect who had done it until the very end which is great! You can tell this is not the first book in the series but the fun of a cozy mystery is you don’t really have to start at the beginning this book is no exception Laina Turner makes sure you can keep up with the story from the very beginning. If you are a fan of cozy mysteries or even a beginner I definitely recommend this book, and be sure to check out the great audio book the narration makes it so much better.

Tiaras and Texans by Laina Turner is a great book. I loved how the author blended mystery, romance and humor. The storyline was original and kept me engaged. I liked the characters, and did not see who the killer was. The imagery is great, and the descriptions of the beauty pageant and contestants was so vivid. Lee Ann Howlett was great bringing the characters to life. She added the right emotions to her voice and I could hear who was speaking. I requested this review copy audiobook and have voluntarily written this review. I will definitely listen to more books by this author and narrator. I loved it!

This story was a cute and entertaining book. Presley and Cooper are checking into pranks being made on the beauty pagent contestants. Then there is a murder of one of the contestants, Now Pressley and Cooper are working to help find out who the prankster and murderer is. I gifted this book at my request in exchange for an honest review. The narrator did a great job with bring the characters to life.

I was surprised to find out who did it even though there where hints. There are one or two things I did guess but not the murderer.
Clean read with some mild violence.

So much for beauty queens!

A good listen with interesting characters and you liked how the narrator told the story. So when you get a chance pick up a copy and enjoy.
I received this title in exchange for an unbiased review.

Somewhere in time, giggle, Presley and Cooper made a wager. If she won he would take her on a case with him. That case is now. They are going to be a protection guard for a Texas beauty pageant. Just when she thinks it's going to be a dull time, one of the contestants is killed. Now her and Cooper have to figure out who and why.
Lee Ann Howlett is a wonderful narrator and brings Texas twang to life in this audio.
Fantastic story and audio!

A cute little story with a lot of Texas flavor. It shows you the other side of being in a beauty pageant which is totally believable except for One thing. Otherwise it is a great way to spend time while your having a mani-pedi. Y'all come back now ya hear.

Just ok for me

I think I would have liked it fully if it had been longer and had more time to develop. I liked the idea and that it was a cozy. The characters were likable but I think it was a lot to ask of 3.5 hours.

The narrator was very nice, but spoke to slowly for me. I found myself losing interest or spacing out and not retaining. I had to go back a couple of times because I missed something. Once I sped the reading volume up, it was great.

What can go wrong at a beauty pageant?

A Texas beauty pageant is the centre stage for this short who-done-it; a crowd of beautiful but precocious teens, all hoping for their big break. I'd never really thought about all the work that goes on behind the scenes, from hair and make-up, to fake tans and expensive dresses, so this got me thinking and Googling about what it takes to be a winner.

Presley Thurman has finally persuaded her boyfriend to allow her to join him as part of his security team. She was hoping for something more challenging than a teenage beauty pageant, but strange events have been going on behind the scenes and the pageant organisers have decided they need security to protect the girls. Dresses have been stolen, hair dye bottles filled with black dye and then one of the girls is found dead.

Presley makes a good job of her first assignment and is able to mix with the girls and gain their trust. Who is causing this havoc and who can have reason to commit murder?

It's only short, 138 pages, or 3 hrs 30 mins as an audiobook, but it was a fun listen, narrated by Lee Ann Howlett with an appropriate American drawl. Although it is the 6th book in a series, I didn't feel that I'd missed too much background.
The main character is Presley, the others we got to know to lesser degree. I wasn't so convinced by the denouement though, hence the three stars (3.5 on sites that allow half stars).
An interesting insight into the pageant business and a good book for lovers of cosy mysteries.