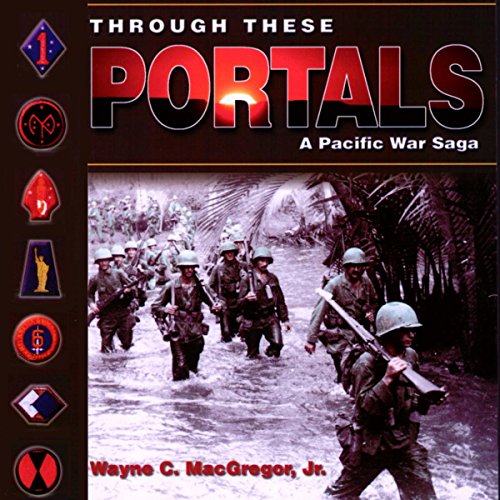 By: Wayne C. MacGregor
Narrated by: James Killavey
Try for $0.00

This remarkably immediate memoir tells of the U.S Army's essential role in the Pacific campaigns alongside the Navy and Marine Corps. America's sons, born in the first quarter of the 20th century, were forged in the twin crucibles of the Great Depression and World War II. The values and attitudes of these mostly idealistic young males ultimately sustained them in horrific trials against incredibly courageous, and often suicidally-committed, Japanese soldiers blindly loyal to their superior officers and the Emperor.

MacGregor graphically describes the dire Depression years of 1930s America, when he grew up in Spokane, Washington. He then takes listeners through a heart-felt account of the war years and the savage, face-to-face small-unit actions in the Mariana Islands, the Philippines, and Okinawa from 1944 to 1945.

"...[better reveals] the depths of horror that ordinary humans are forced to go through in the name of duty." ( Spokesman Review)

What listeners say about Through These Portals

Where does Through These Portals rank among all the audiobooks you’ve listened to so far?

One of the best...certainly the best true life war book.

Which character – as performed by James Killavey – was your favorite?

Again...the author. Narrator did a very good job. Clear and conveyed emotion when called for without going over the top.

Title of book..Through These Portals.

The young men who enlisted or were drafted and sent to the Pacific theater thought they were going on "a great adventure." They left the U.S. as boys and, those who survived, came out battle hardened men who saw death many times and often inflicted death. The battle scenes in this book are as true to the the horrors of war the way it really is as any book I have ever read. And I've read a lot of them.Our country would not be what it is today if not for the sacrifice of all those incredibly brave men. The book is a raw and powerful look of what they had to go though to ensure freedom for the rest of us.This book is the best first person WW II book I've read. It is a must read for those who, like myself, want to know what the war in the Pacific was really like. My father was there but would never talk about it. Now I know why. He, and the many others who went though that hell were true American heroes but they simply did not want to relive, even for a moment, those awful memories. God bless you Dad, and God bless all our troops, past and present.

Where does Through These Portals rank among all the audiobooks you’ve listened to so far?

One of the very best. Number two on my favorite list just behind The Wrong Stuff.

What other book might you compare Through These Portals to and why?

Never read a book like this so really can't compare.

Which character – as performed by James Killavey – was your favorite?

This was not a book of fiction so...the author, I guess. Reader did an excellent job. I got this book because I enjoyed his narration of The Wrong Stuff so much.

There were a lot of them. Those were incredibly brave young men.

Was a wonderful and educational listening experience.

What did you love best about Through These Portals?

Gave me a better appreciation of what my father the others members of the U.S. Army went through to preserve our freedoms.

What was one of the most memorable moments of Through These Portals?

The night raid by the Japanese.

What does James Killavey bring to the story that you wouldn’t experience if you just read the book?

Quite a few of them. Hard to pick out one.

Incredible heroism of these soldiers vividly brought to life in this book.You couldn't make this stuff up..no one would believe it.

Could not make it through

The story was fine, I had to stop listening because the narrator was so distracting
His speech pattern and odd pronunciation mad this the first book in years I have not finished.