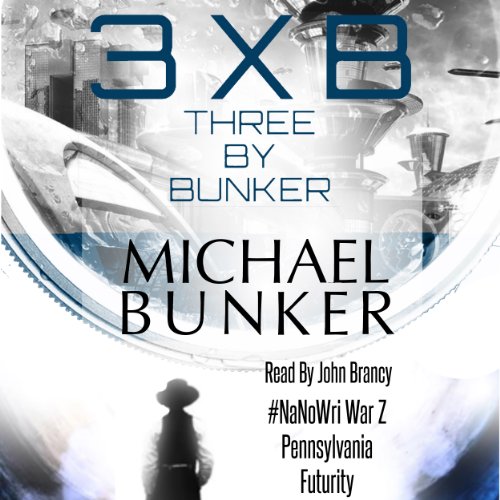 By: Michael Bunker
Narrated by: John Alexander Brancy
Try for $0.00

Three short fictional works: a short story, a novelette, and a short novel by Michael Bunker.

"#NaNoWri War Z", a novelette: A government experiment in creating super-soldiers goes awry when a new virus is tested on a struggling independent writer from Leeds, and now peculiar zombies are on the loose in London and they are only eating good writers. As bad writers struggle to be validated by being eaten by zombies…who refuse to eat them…will England be left without any good writers at all? Will the country become just another France? "#NaNoWri War Z", written by Michael Bunker during the real #NaNoWriWee competition.

"PENNSYLVANIA", a short story and first entry in the Pennsylvania series. Jedidiah Troyer signed up for an emigration program that is colonizing the planet of New Pennsylvania. He just wants to start a farm and homestead on some affordable land in a new Amish community on a distant planet. Space pioneering isn't as easy as it sounds when you're "plain." Things might work out for Jed…if he can ever get to his new home.

"FUTURITY", a short novel: Everyone wants to travel to the past. Not Malcolm. He wants to go into the future…and he's just found out that Dr. Paulsen, Professor of Optics at Rochester-Finney University has figured out how to do it. Malcolm is a third year physics student and a gamer. He's about to get more than he ever bargained for and he's going to take you along for the ride.

What listeners say about Three by Bunker

I read the three parts separately and loved them, the audiobook version gives even more depth to them, the interpretation is quite good.

#NaNoWri War Z: Hugh Howey Must Die!
This short novel is really funny to read, even better if you listen to the audiobook version. It's incredible to think it's been written in just a few hours!

Pennsylvania
I got curious about the idea at the base of this novel. Michael Bunker is able to achieve what seems an impossible task: Amish SciFi (the main character explains space travel while milking a cow). He talks about the past to describe what might be a possible future, same problems with same answers. In this framework the story of Jed is developed.
This first part ends with one (or even two) cliffhanger and I really hope the author keeps on telling this amazing story.