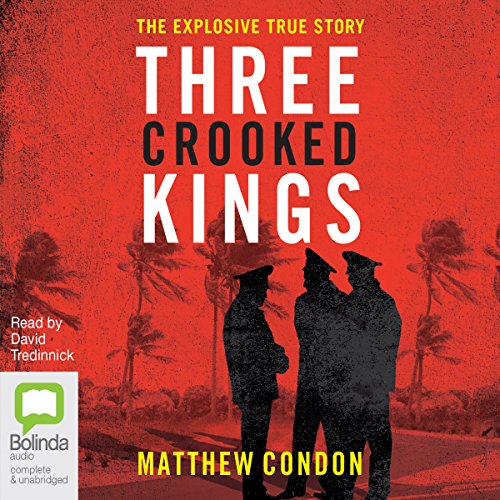 By: Matthew Condon
Narrated by: David Tredinnick
Try for $0.00

The definitive account of an era that changed Queensland society - a searing story of greed, crime and corruption.

Three Crooked Kings is the shocking true story of Queensland and how a society was shaped by almost half a century of corruption. At its core is Terence Murray Lewis, deposed and jailed former police commissioner. From his entry into the force in 1949, Lewis rose through the ranks, becoming part of the so-called Rat Pack with detectives Glendon Patrick Hallahan and Tony Murphy under the guiding influence of Commissioner Frank Bischof.

The next four decades make for a searing tale of cops and killings, bagmen and blackmail, and sin and sleaze that exposes a police underworld which operated from Queensland and into New South Wales.

This gripping story exposes the final pieces of the puzzle, unearths new evidence on cold cases, and explores the pivotal role that whistle-blower Shirley Brifman, prostitute and brothel owner, played until her sudden death.

Based on extensive and unprecedented access to Terry Lewis and his personal papers as well as hundreds of interviews with key players and conspirators, award-winning journalist and novelist Matthew Condon has crafted the definitive account of an era that changed a state and is still reverberating to this day.

possibly a good doco book well read but flits all over the place hard to get interested in even though the narrator is good couldn,t get passed first few chapters

I really wanted to finish the last few hours of this book because of the subject. It's impossible to follow because of the writer's propensity to continuously jump from one quote to another or from one time frame or location to another without lending any decent amount of informative writing so that the listener can make the appropriate connections. It's like looking at a bunch of Legos on the floor and trying to imagine what they make when put together.
Horrible writing. The narrator did a great job with what he had to work with.
Avoid this title at all costs.

great story but not a smooth read

Great read on contemporary Queensland history leading up to the Fitzgerald inquiry ... the only thing annoying was the constant " he said she said that she said" etc ... I had to re-read these bits multiple times to understand who's who's and which who said what etc... convoluted, confusing and annoying at times...it doesn't read easily this book...you probably need to write down names of folks as you go along because these folks pop up here and there and later in the narrative; often in a convoluted confusing way; and you're off wondering " now who was that again". Anyway I persevered through because it's a fascinating part of Queensland history; before my time; though the tail end of police corruption leading to Fitzgerald; eventually touched my time. Great read but be prepared for some name-dropping that will have you back tracking and re reading stuff.

a great book to learn about the corruption in Queensland police force and what lead to the Fitzgerald enquiry.