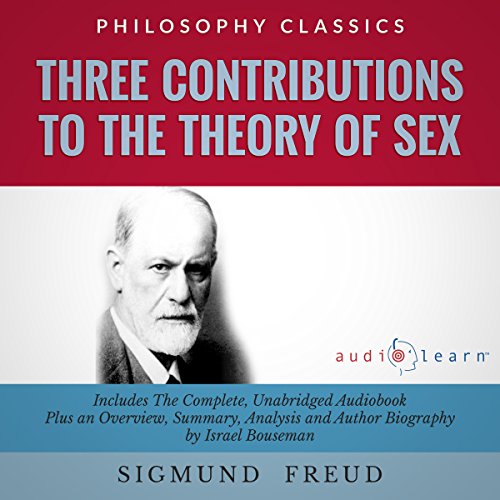 Three Contributions to the Theory of Sex by Sigmund Freud

By: Israel Bouseman,Sigmund Freud
Narrated by: Doug Eisengrein
Try for $0.00

Sigmund Freud is known as the father of psychoanalysis and is perhaps the most significant figure in the history of psychology. He was the first to have recognized the influence of the unconscious and to have developed a theory of the structure of the mind that took it into account. Freud's ideas, including coping mechanisms, repression, denial, libido, and ego have become household terms, key elements of the modern understanding of the human experience. At the same time, we cannot explore Freud's perspective without encountering the biases, shortcomings, and historical limitations that each person of genius has worked to overcome. These limitations are clear and evident in Freud's perspective, including his extreme emphasis on sexuality as the cause of all psychological dysfunction and his perception of the feminine nature. Without his exploration and description of these elements of contemporary thought, however, a number of these perspectives would likely have persisted to this day.

The works of Sigmund Freud are the foundation of modern psychology. They display a brilliance and insight into the mind which overshadows the understanding of many of those to follow. This insight is demonstrated beautifully in Three Contributions to the Theory of Sex, one of the first serious psychological examinations of the role of sexuality in the human experience.

The AudioLearn version of the text is preceded by a comprehensive summary, including an overview, synopsis, and analysis of the work. Also included are a brief biography of Sigmund Freud and an examination of his impact on history and society, as well as an exploration of the key criticisms that arose in response to his work.

This version of Three Contributions to the Theory of Sex is ideal for those who wish to understand the workings of the mind and for any who would like to explore Freud's life and his revolutionary impact on the field of psychology.

Freud is one of the most well-known and perhaps most controversial names in psychology. His thoughts reflect his era, in a way. He has some quite misogynistic views and a clear fixation on sex. At the same time, his theories are profound and far reaching. He had the courage to explore areas of human psychology and behavior that were considered taboo by his contemporaries. As a result, he shone a light into the dark places of human consciousness.

This work is a perfect example of Freud’s controversial nature. He explores sexuality in a way that views everything other than penetrative intercourse for the purpose of reproduction as “perversion.” This is only one of the elements that created a bit of resistance in me when hearing the work. At the same time, when I let it sink in a bit, I could see that there is quite a bit of insight to his ideas. Plus, though Freud uses terminology that is, quite frankly, a bit off-putting, he goes on to interpret these things in a way that eliminates much of the judgment and the seeming air of condescension.

One example of this is how Freud views perversion. First, he describes it as a deviation from the normal sexual aim or object. Essentially, as wanting something other than penetrative sex for reproduction with a member of the opposite sex. This includes something like a kiss. He views a kiss as an act that has sexual charge, and that is related neither with the normal sexual act, nor the genitals, which would be the normal sexual object. At the same time, he describes perversion as a universal human quality, and one that is present in healthy individuals. This means that he’s not saying a kiss is wrong or really perverse as we think of the term. Just that it is a redirection o the sexual impulse away from a purely biological manifestation.

This work is divided into three sections. The first explores the nature of perversion, breaking the sexual nature down into sexual object and sexual aim. His argument is that a perversion is a redirection of either object or aim. Looking and touching, for examples, are considered as precursors to the sexual act and intended to build up sexual energy sufficient for the act. If we are to linger in these stages, then we have perversion in the form of voyeurism. He also explores perversion in terms of an “unnatural” sexual aim, such as attraction to the same sex, or to children or animals. In the politically correct modern era, this is bound to ruffle a few feathers.

The point is, though, that Freud is discussing this in a cold analytical light, bereft of judgment. He’s doing his best to dissect the subject as a man of science. There are some obvious drawbacks to this point of view. At the same time, it allows him to step away from some of the dogmatic perspectives of sex and even of perversion, and to view these subjects in a light that allows new and fresh understanding of human sexual behavior.
The next two sections of the work explore how sexuality is present in children and infants. Once again, the knee-jerk reaction to this idea is both obvious and understandable. Children and sex? Definitely two subjects that shouldn’t be brought together in civilized conversation between healthy, well-adjusted adults. But the fact is that we do have a latent pleasure-seeking characteristic in human behavior. And that this pleasure seeking has its connection with sexuality. Although these drives do not manifest fully until puberty and sexual maturity, they must be present in some form in younger human beings in order to mature into what we understand as the healthy and normal sexual drive.

One thing I found fascinating about this aspect of the work, and one detail that was brought into light for me by the biography in the early part of the summary, was that Freud had many children. He came from a large family himself, and married relatively early. He also observed the development of his own children, watching their behavior from the same lens of psychoanalysis through which he viewed his patients. This means that much of his theory comes from firsthand observation. In the world of Western psychology, this is a relative rarity. I find that it lends credence to some of his thoughts on the subject, even though thy might just rub us the wrong way.

Another aspect that he touches upon in this work, and one that I found fascinating, was the connection between neurosis and sexual repression. I know that, in a way, this was one of the cornerstones of Freud’s perspectives. At the same time, when hearing of his work from others, it sounds pretty unconvincing. However, when he lays it out as he has in the work, it makes a pretty compelling case. We all have certain drives, certain energy that moves us to take action. When these drives are co-opted, when the natural way of expressing this energy is for some reason not allowed, then we will find some other way to express them. Because a good bit of this is subconscious, we might not even be aware that we are doing it.
I have to say that I came to this work with quite a few preconceptions about Freud’s ideas. I had a pretty solid grasp of what I thought he said, and some fairly firm ideas of how I disagreed. But this is one of the beauties of hearing a primary source document, an account of the thoughts and perspectives of a psychologist in their own hand. He was a brilliant man, and due to the controversial nature of his work, many of the ideas were expressed in a manner that put them in the light of obsession or sexual fixation. I have to say that it’s given me a great deal to think about, and that I have much more respect for Freud’s perspective after listening to this piece.

this Book was over my head