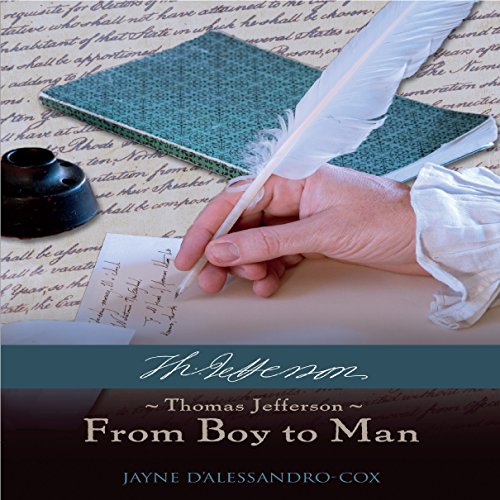 Thomas Jefferson: From Boy to Man

Have you ever wondered, "Who really was Thomas Jefferson?" History tells us he was a brilliant scholar, violinist, surveyor, astronomer, lawyer, planter, bibliophile, architect, founding father, statesman, governor of Virginia, ambassador to France, Secretary of State under George Washington, vice-president under John Adams, the third US president, scientist, natural philosopher, family man, and sage. So much is known about Thomas Jefferson from the drafting of the Declaration of Independence until his death, but little was known about his first 31 years of life, until now! Thomas Jefferson: From Boy to Man is a biographical, autobiographical, and historically accurate account of Jefferson's journey to manhood...an era that was virtually "in the shadows". You will learn about his ancestry, childhood, adolescence, family, friends, boarding schools, family deaths, college years, romance, law practice, fire, earthquakes, flood, and more. It is partially spoken in a journal format, and supplemented with background information to further inform the listener. Thomas Jefferson: From Boy to Man provides personal information about our iconic founding father that will help unlock the mystery that surrounds Virginia's most beloved son. As you listen about Thomas Jefferson, the boy, you will realize how his early life years helped shape the personality, character, intellect, morals, and religious beliefs of Jefferson, the man. The audio is filled with emotion, humor, personal reflection, and fanciful imagery, and includes many authentic Jefferson quotes. Many say that Thomas Jefferson was complicated. I say, "In order to understand the man, it is important to learn about the boy." Enjoy listening to Thomas Jefferson: From Boy to Man to unlock the mystery!

What listeners say about Thomas Jefferson: From Boy to Man

This book is chalk-full of amazing, little known details about Thomas Jefferson’s early life. It truly provides a unique experience for the listener with a rare glimpse into his personal life. I feel like I know him now!

I loved this unique detailed account of Thomas Thomas Jefferson's life! I am history teacher and a student of the Revolutionary period. Cox's view and perspective provides specific details in a manner no other book does. This is a definite read for any student or lover of American history and the founding of our country!

Probably the worst written and presented bio ever. All useless information. Stick with Ken Burns.