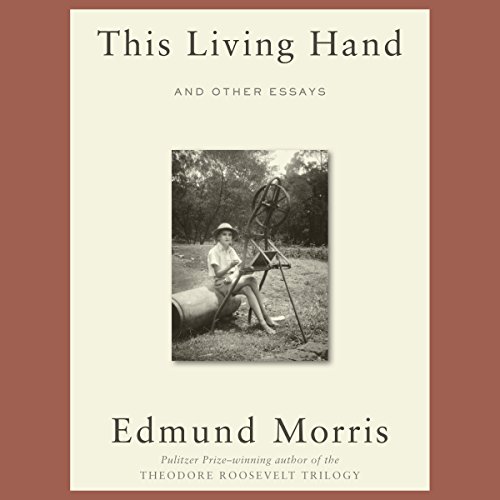 When the multitalented biographer Edmund Morris (who writes with equal virtuosity about Theodore Roosevelt, Ronald Reagan, Beethoven, and Thomas Edison) was a schoolboy in colonial Kenya, one of his teachers told him, "You have the most precious gift of all - originality."

That quality is abundantly evident in this selection of essays. They cover 40 years in the life of a maverick intellectual who can be, at whim, astonishingly provocative, self-mockingly funny, and richly anecdotal. (The title essay, a tribute to Reagan in cognitive decline, is poignant in the extreme.)

Whether Morris is analyzing images of Barack Obama or the prose style of President Clinton, or exploring the riches of the New York Public Library Dance Collection, or interviewing the novelist Nadine Gordimer, or proposing a hilarious "Diet for the Musically Obese", a continuous cross-fertilization is going on in his mind. It mixes the cultural pollens of Africa, Britain, and the United States, and propogates hybrid flowers - some fragrant, some strange, some a shock to conventional sensibilities.

Repeatedly in This Living Hand, Morris celebrates the physicality of artistic labor, and laments the glass screen that today’s e-devices interpose between inspiration and execution. No presidential biographer has ever had so literary a "take" on his subjects: He discerns powers of poetic perception even in the obsessively scientific Edison. Nor do most writers on music have the verbal facility to articulate, as Morris does, what it is about certain sounds that soothe the savage breast. His essay on the pathology of Beethoven’s deafness breaks new ground in suggesting that tinnitus may explain some of the weird aural effects in that composer’s works.

Masterly monographs on the art of biography, South Africa in the last days of apartheid, the romance of the piano, and the role of imagination in nonfiction are juxtaposed with enchanting, almost unclassifiable pieces such as "The Bumstitch: Lament for a Forgotten Fruit" (Morris suspects it may have grown in the Garden of Eden); "The Anticapitalist Conspiracy: A Warning" (an assault on The Chicago Manual of Style); "Nuages Gris: Colors in Music, Literature, and Art"; and the uproarious "Which Way Does Sir Dress?", about ordering a suit from the most expensive tailor in London.

This Living Hand is packed with biographical insights into such famous personalities as Daniel Defoe, Henry Adams, Mark Twain, Evelyn Waugh, Truman Capote, Glenn Gould, Jasper Johns, W. G. Sebald, and Winnie the Pooh - not to mention a gallery of forgotten figures whom Morris lovingly restores to "life". Among these are the pianist Ferruccio Busoni, the poet Edwin Arlington Robinson, the novelist James Gould Cozzens, and 16 so-called "Undistinguished Americans", contributors to an anthology of anonymous memoirs published in 1902.

Reviewing that book for The New Yorker, Morris notes that even the most unlettered persons have, on occasion, "power to send forth surprise flashes, illuminating not only the dark around them but also more sophisticated shadows - for example, those cast by public figures who will not admit to private failings, or by philosophers too cerebral to state a plain truth." The author of This Living Hand is not an ordinary person, but he too sends forth surprise flashes, never more dazzlingly than in his final essay, "The Ivo Pogorelich of Presidential Biography".

What listeners say about This Living Hand

This Man Inspires Me to Learn Literature

This is an extremely dense book rich with information and history. It is rare that I will read a book and have to go back to the dictionary on a page by page basis to understand new words I have never seen or heard. I particularly enjoyed the short stories about Beethoven and Ronald Regan. My plan is to read both of these biographies soon. I also purchased a hard copy because there were several essays I wanted to share with my father or my wife and kids. Reading this book was like eating caviar. I want more!
Mark R McLaughlin, MD